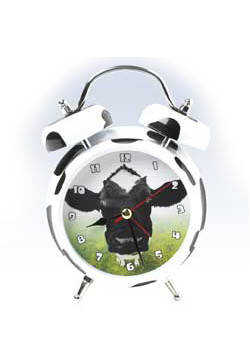 Some Clocks Work Differently Around Here

Those of you that have lived for an extended time in the city know that things move at a pretty quick pace for all practical purposes. If you make a deal to buy something and then don't show up on time, your deal probably just flew out the window as there seems to be a never ending supply of folks wanting to buy just about whatever you might be selling.

What brings this to mind is my dealing with a fellow about a Craigslist ad. If you have not heard of Craigslist.com, it is a web site that has classified ads for just about everything. From tools to quilting supplies, you can find just about anything on Craigslist. In our area, you can see ads that are centered in Grand Island, Omaha, and Lincoln, and there are nationwide listings you can navigate to easily.

Anyway... I was surfing through Craigslist several MONTHS ago and came across a "wanted" ad. The guy was looking for an old wood stove for a shop he was building, and I replied that I had one if he was still interested... I didn't see the ad until it was a couple weeks old already.

He emailed me back and said he was interested, but was in Holdredge and would be coming this way in a few days. Well, I didn't hear from the guy for a couple months and then got an email that he was still interested if I still had it. I responded I had it, but heard nothing again for several months until last week when the phone rang. It was the guy looking for the wood stove, he was in town for an auction, and did I still have the stove to sell? "Yep" I replied, and soon after my old wood stove was on his trailer heading down the road, and I had a few extra bucks in my pocket. This little story started about 8 months ago.

Some folks in rural Nebraska seem to operate on a really different time clock than the city folks I've known. I think I've commented on this sometime in the distant past, but it takes a bit of getting used to for a newbie to the area. Most business seem to close for lunch hour in our town which I never experienced in the city, and it can take months to get a deal done that in the city would have been done on the day of initial contact.

If I sound like it bothered me that it took so long to get the stove deal done, that couldn't be further from the truth. It's nice that people don't feel like they have to jump through a bunch of hoops to get things done. I think people in these parts have known for a long time that being in a hurry doesn't necessarily get things done any faster, and I'm glad I figured it out too.

On another topic, the green thumbs of NW Furnas county seem to be having a banner year. Margie's tomato plants are loaded, and we've been eating off them for almost two full weeks now. We only get one or two every couple days so far, but that first one was GREAT! The second, third, and forth were just as good, but we don't have enough to share with the neighbors yet. In the last couple days however, we've gotten sweet corn and cucumbers from neighbors. Have not sampled the cucs yet, but we gobbled up the corn and Margie said it was the best she's ever had. As far as I'm concerned, it was only in the top 5, but then I can't discern which of the top 5 is the best, so these ears might just be them. Thanks Neighbors!