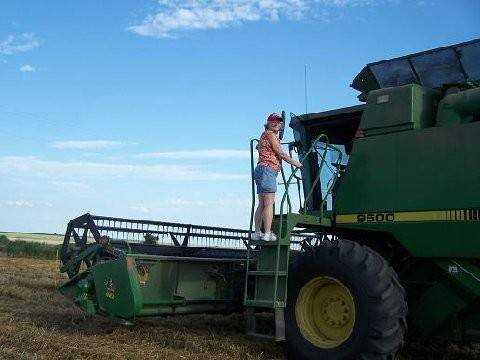 Yesterday Margie got her first ride in a combine and what a surprise she got. She expected a rough, noisy, hot, and dusty ride, but experienced something quite different. At the end of the day, we sat outside thinking about what goes on right outside our living room window.

Farmers... what a life they have! Work outside in the fresh air everyday, no managers with their "guidance" on how to do the job, completely flexible work scheduling, and even the opportunity to dance and play while getting the job done.

Let's break that down just a little bit...

Work outside in the fresh air - Well yes and no from my observations. Work outside. yes, but the fresh air is questionable now and then. Yesterday I got the chance to ride in a combine for a couple hours and I can tell you even with that nice air conditioned glass cab, it's still a dusty proposition. My combine/harvest tour guide yesterday mentioned his first combine that had no cab. I can hardly imagine.

The dancin' and playing part of this story is "playing" with the big equipment farmers have to use. I don't think I would ever get tired of operating the machinery farmers use on a daily basis, and the dancin' part of the blog is the combine ballet that goes on when a couple of the big harvesters or more get together to work over the same field. They zig and zag and pretty much find a way to mostly stay out of each others way most of time, and a casual observer would wonder "what in the world", but there is certainly a method to the dusty dance of the combines beyond just point and go.

To me, farmers get a big payoff for their independent lifestyle. Maybe they don't have such a great "job" now and then by a lot of city folk standards working long hours outside in dust, wind, sun, snow, through drought and blizzards, and from the Brian Hoag dictionary... must (dusty mud - Nebraskans must have named this already, but I'll add it too just in case I came up with original terminology).