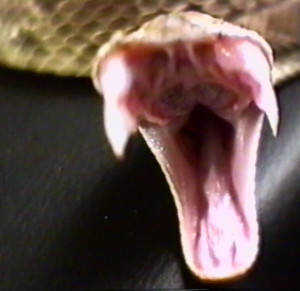 Every Snake I See, This Is My Thought

When I was a kid, my mother would scream at the sight of a snake. I'm pretty sure she hasn't changed her tune much over the years either, so I'll blame my dislike of snakes on her. I'm not really afraid of snakes, but the darn things always surprise me even though they seem to be mostly interested in getting away from me about as much as I want to get away from them.

There is just something about snakes. A TV actor commented about the movie "Snakes On A Plane" by saying... Snakes on a plane, now that's scary. Imagine them in the seat back pockets, in the overhead, under your seat, ... you get the idea, and to be sure, though I somehow consider snakes on a plane an unlike prospect, if they were there, it would be scary. Even action hero Indiana Jones asked... "Why does always have to be snakes", so my dislike of snakes is pretty widely held.

What brings this all up is that last evening our neighbors stopped by with the remains of a rattlesnake draped across the front of their ATV. It was a rather large specimen for this area I was told... about 45 inches long, with at least 10 visible rattles and more looked like had they been broken off at the tip. Even though the darn serpent was dead, I wasn't interested in touching it either. The head was missing so I KNEW that snake was going nowhere... just the sight of the creepy thing was all I needed.

Now I'm not sayin' I think my neighbor is a practical joker, but the conversation moved on to what to do with the dead snake. One comment was that it would be fun to coil it up on so and so's car seat, and another idea was to place it on the front step at another place.

So if you are reading this and found a headless snake in an unusual location, I KNOW NOTHING! I subscribe to the ideology of plausible deniability when it comes to snakes, their demise, and their final resting places.