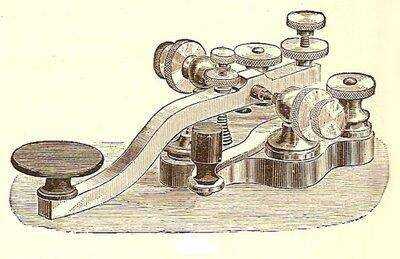 April 27, 1791 - Samuel FB Morse was born in Charlestown, Massachusettes. What makes this Sam special is that he is the guy that invented the electric telegraph and Morse code which are still capable of sending pretty high speed messages... more on this in a bit.

When I think of the telegraph, I get a vision of guys placing poles and wires across the West while Native American observers watched. I imagine they wondered what the wire and poles would really mean to them at the time.

To citizens of the time, it was a major jump in technology with the ability to communicate long distances with a speed not dreamed of. It changed everything communication wise with the first casuality being the Pony Express... who by the way celebrates it's 150th anniversary this year.

I know Morse code. I pounded out code for years when I was an active amateur radio operator. It is still used today and is even a requirement for some US Government radio license testing with minimum sending and receiving speeds being one of the test criteria. The combination of dashes and dots, or long and shorts if you prefer, provided a way to send words prior to the telephone, and though listening to words is what is most often used these days, during emergency situations radio amateurs using good old Morse code can save the day.

Now back to the speed thing I mentioned at the start. It turns out there have been contests between old and new technology when it comes to "messaging", and Sam's code is still a winner versus text messaging. Yep... here's the proof... Click here ---> http://www.youtube.com/watch?v=hc5j4Bia9nI