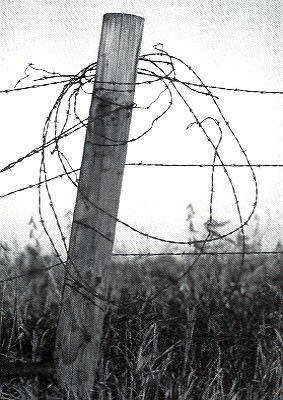 They seem to have popped up just about everywhere around the countryside, especially if livestock is involved...specifically cattle. I dunno if livestock other than cattle such as horses, llamas, sheep, goats, swine and whatever else farmers may have a need to keep contained stay away from that single strand wire fence that has cropped up everywhere, but somehow I doubt it.

That single strand of non barbed wire certainly looks like it would be pretty easy to install. It appears that farmers need only stick a rather short metal rod in the ground with what I've observed to be either red or yellow plastic mounting hardware for the fencing wire, run a spool of wire out along the line of the plastic equipped rods placed around the confinement area, and finish putting up the single wire fence by placing the wire in the plastic mounting brackets on the rods and pulling the wire tight so it doesn't touch the ground.

I've seen that this type of fence will keep even the largest cattle I've seen in these parts within it's confinement area with only the following exception. One of my farming neighbors has one of these fences that crosses a bit of a dip in the topography, and a very small calf was observed going under the fence at that point. Other than that, that wire does it's stuff!

I know it's electrified... I'm not a totally ignorant city slicker. Heck, my grandpa told me when I was a kid visiting the country that you could tell if an electric fence was "hot" by picking a green blade of grass and laying it on the fence. If the blade of grass folded over, the wire was hot. I never tried his idea.

However, what brings this whole thing up is every time I drive down US Highway 6&34 between Cambridge and Bartley, there is a field that has some really big cows, and nothing but that single strand of wire to keep them off the highway... Makes me think that the normal 3 strand barbed wire used to keep cattle confined that I'm more used to seeing throughout the west sure looks a lot more secure. I guess from my previous logic, maybe Nebraska cows are just smarter.