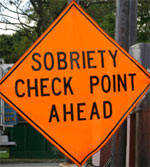 A story out of New York caught my attention and I want to share. A man was arrested in Long Island New York's Suffolk County for DUI according to an AP report. Now a DUI bust isn't that unusual unfortunately, but the rest of the story is what I found compelling.

You see... this particular driver was convicted of DUI previously and had a breath alcohol device installed in his car to keep him from driving drunk. Unfortunately his latest arrest for DUI found him behind the wheel of a rental vehicle crashed into a utility pole.

On one hand, we don't have information about where the driver lives so he may have been traveling, or perhaps his personal vehicle was being repaired and the rental was a temporary replacement.

On the other hand, Mr Smith may be guilty of premeditated DUI. Did he rent because he was unable to get his starter controlled car running? Did he know he was going drinking and rented a car so he could get home??

Now I've never heard of premeditated DUI, but I also imagine that there is some law to cover the trangression. The way things often work in a situation like this is that the guy goes to jail, and another law is made to make this type behavior more punishable.