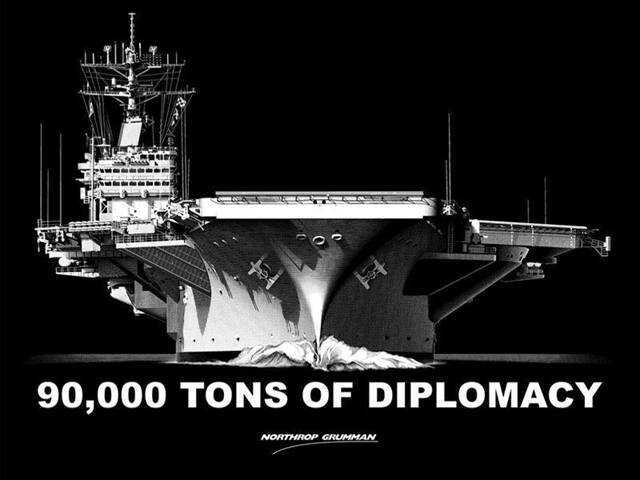 News on the Internet recently mentioned China and their censorship of President Obama's Inauguration speech. It seems the Communist regime there doesn't like it when somebody mentions things that are not in alignment with the government philosophy. I find it interesting that the Chinese feel it necessary to censor comments by our President. It rather flys in the face of much of the reaction the rest of the world is reporting to the speech, and I'd think that the censorship by China would be detrimental to their own foreign policy.

The USA has it's own idea of diplomacy and how to project it. We've been accused of pushing our national weight around now and then, and in some ways, it's hard to argue against that. For example, USA aircraft carriers have more flight deck space than the rest of the world combined! Our largest carriers have 4 1/2 acres of flight deck, and we've got 12 of 'em! Now not all are at sea at any one time, but at least 3are, and we're building more as we speak. Some will be retired as new ships come on line, but the cost of tearing apart one of these floating airfields isn't cheap either. One source says it costs nearly 1/4 the price of building a new one to take an old one apart... http://www.globalsecurity.org/military/systems/ship/scn-cv.htm

With all the money spent to try and bolster our economy with billions of dollars and no end in sight, the 4.4 billion dollars it takes to build a new aircraft carrier seems like pocket change. Of course that 4.4 billion doesn't count the cost of the aircraft that make the carrier so awed by other nations. Put 80 or so planes on one of those ships and now you have more firepower than most countries have. Now aircraft carriers never travel alone. You must have a large battle group of ships that should be able to take care of just about any threat above and below the surface. http://www.globalsecurity.org/military/world/carriers.htm

With so much floating and aerial firepower, it's hard to imagine that anyone would mess with the USA. Still with all the might of our military, small groups of terrorists attack with little regard for the power we wield because though our military was designed to wipe out anybody, we never do and they know it. If Iran becomes hostile with nuclear weapons, what will we really do? Only our leaders know for sure, but though our military is capable of flattening every inch of Iran, we won't do it. Kinda makes me wonder why we need all that military might if we're not willing to use it.

I'm sure our military restraint has much to do with world opinion of what could happen if the most powerful military in the world unleashed it's full potential on an adversary such as Iran or Al Queda or who ever else we chose to pick a fight with. In the not too distant past, we likely needed the deterrent afforded by our military might, and staying strong in the future should keep other country aggressors at bay. We obviously have the ability to defend ourselves.

So what's my point? We have a purpose to be the worlds leader, not the worlds bully.

On one of the local TV stations news last night, the opinion poll (not scientific) reported that 82% of people responding to a question about closing Guantanamo Bay said we should keep it open to question terrorists. I was amazed! I find it difficult to believe that Nebraskans feel that it's OK to keep prisoners off shore to avoid our own laws about treatment of prisoners. Our country speaks of being fair and playing by the rules, even if our adversaries don't, so it's pretty obvious that Guantanamo has been used to skirt the rules. What gives us the right to hold people suspected of a crime with no proof and no charges? Calling them prisoners of war makes it OK?

Some will say that to stop terrorism on our soil, it's OK to do whatever is necessary. I disagree. Though I don't want another terror attack anymore than anyone else, trampling on the rights that made this country great is not OK with me in the name of protecting us from harm. I totally agree with a statement made over 200 years ago by Ben Franklin...

"They who would give up an essential liberty for temporary security, deserve neither liberty or security."

The condition of being free from restriction or control.

The right and power to act, believe, or express oneself in a manner of one's own choosing.

The condition of being physically and legally free from confinement, servitude, or forced labor. See synonyms at freedom.

A right or immunity to engage in certain actions without control or interference: the liberties protected by the Bill of Rights.

A breach or overstepping of propriety or social convention. Often used in the plural.

A statement, attitude, or action not warranted by conditions or actualities: a historical novel that takes liberties with chronology.

An unwarranted risk; a chance: took foolish liberties on the ski slopes.

And especially for Arley...

A period, usually short, during which a sailor is authorized to go ashore.

As world leaders, it seems to me that the USA should strive to lead in all ways... including prisoner treatment and detention. I may not agree with our new President about a lot of things, but I do with regard to Guantanamo and prisoner treatment. The world knows how we've been treating prisoners at Guantanamo and other places, and I believe that we invite attack because of rules our country adopted towards suspected "combatants" instead of adhering to our countries principals of fairness, justice, and human rights.

More from this blogger · Brian Hoag
Comments
View 12 comments
Note: The nature of the Internet makes it impractical for our staff to review every comment. Please note that those who post comments on this website may do so using a screen name, which may or may not reflect a website user's actual name. Readers should be careful not to assign comments to real people who may have names similar to screen names. Refrain from obscenity in your comments, and to keep discussions civil, don't say anything in a way your grandmother would be ashamed to read.
Respond to this blog