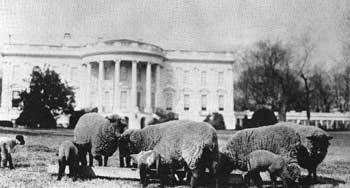 President's come and they go, and since we're about to have a new target for the blame heaped on the man leading the country, perhaps a bit of history is in order...

Woodrow Wilson kept a flock of sheep on the White House lawn to replace expensive gardening equipment during WWI. It was a reflection of the austerity on the homefront during the war. The flock produced enough wool to bring in $53,000 to an auction that benefitted the Red Cross.

It wasn't until 1901 that the White House became the official name of the President's mansion when the stationary of Theodore Roosevelt made it so.

Apparantly a serious party occured in 1829 when Andrew Jackson was sworn into office. It seems buckskin wearing western supporters drank heavily and tracked mud throughout the mansion.

The White House jumped into the modern age when it got it's first telegraph office in 1866 followed by the first White House phone in 1879. Electricity was added in 1891.

The White House is part of President's National Park.

You can read more about the White House, the park, and its history at...