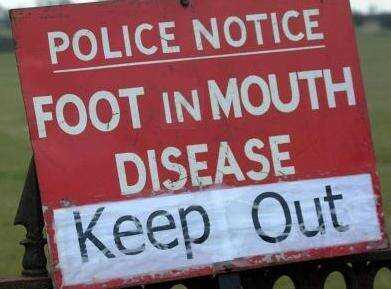 From the Brian Hoag dictionary...

Foot In Mouth Disease - What happens when you open mouth before engaging brain.

For me, getting my foot stuck in my mouth usually follows not thinking something through completely before putting my mouth in gear. I've gotten pretty good for the most part thinking things through before opening my yap, but every now and then things go awry.

It started last year. My brother in law in Colorado Territory owns a small janitorial business and is well thought of by his clients. I'm not too sure how many clients his one man operation has, but he has to turn down referral business as he is as busy as he wants to be. He is one of those folks that doesn't seem to want to be the "market leader" and is perfectly content providing excellent service at a fair price for the clients he has.

All of his clients are relatively small business ventures, but like the majority of businesses out there, I think they have big dreams. Recently one of those companies with big goals decided to upgrade their computers, and offered bro-in-law one of their old computing machines. Mike thought about it for a minute, and decided it was not such a good idea to turn down a free computer, so the company turned the machine off, unhooked all the cables, and handed the works over.

Now bro-in-law and his wife are not computer experts. They both use a computer, but like most folks that have not been trained on these wonder machines, they have little idea how they actually accomplish their designed functions. Since they already had a computer, they decided to offer it to family members. Who wouldn't want a free computer right? Well, Colorado Territory family members didn't quite know what to think about this box of cables and hardware that came with no instructions whatsoever, so they all turned it down. Bro and sis in law were about to donate it to Goodwill or some other charitable organization, but destiny stepped in, giving me a reason to write today's blog.

Margie and I were in Denver to see family for Thanksgiving and guess what... the free computer offer was made to us. I asked a question or two, one of which was... does it work? I was told that indeed it worked as bro-in-law actually watched them turn the machine off and unplug the cables. "Cool" I say, a corporate box from an engineering firm should be a great addition to our place, So the machine got packed up, put in the trunk for the ride to Cambridge, and unloaded right into our home office space... and that's where it sat, and sat, and sat.

So recently, we were visiting with one of our neighbors and I heard the comment that their computer was so slow that they could start doing something on it, get up, get a cup of coffee and do something else and still be waiting on the computer to finish it's assigned task when they returned. Now here is where the foot in mouth disease part come in... I say "we've got a spare computer that we're not using and you are welcome to to it. I haven't plugged it in yet, but my brother-in-law watched as it was unplugged so I have no reason to believe it won't work".

Our neighbor is like most folks that have not been trained in computerise and says. "as long as you're willing to set it up, that would be great". "OK, I'll get it hooked up and make sure everything is good to go and I'll give you a call in the next week or so and we'll get it hooked up for you."

So a few days go by and I get around to hooking the Dell box up. Hmmm... funny keyboard. The companies computer department had scabbed the keyboard as keys had been replaced. I suppose the prior user had either dropped the keyboard or thrown it against the wall as some of the keys were replaced with keys from another keyboard. For example, the "M" was blank, the "L" was a "/", and the "A" was an "X". For hunt and peck typists, this keyboard would be a nightmare! Still, I pressed onward.

After hooking up cables, keyboard, mouse, and other cables, I powered the box up. The lights lit up, the monitor sprung to life, and a message "which device do you want to boot from" shows up. Well, at least it works to some degree I think as I go about checking the BIOS settings for the boot filesystem protocol. After setting the computer to boot from hard drive, I quickly discovered that the hard drive had been erased (a good idea to get rid of company files for sure), but nobody had told bro-in-law that though free, the computer would need some things to be usable.

So I charged forward again anyway by formatting the disk drive, and loading older operating system software I had saved from one of my old computers. This worked pretty good too, but after getting the machine to boot up on it's own, another glaring problem showed up. The disk drive has such a small capacity, that the operating system I had just loaded took up almost the entire storage space of the device. Damn! This computer was hooked to a network where all the operating files were on a centralized disk drive system and the internal hard drive was sized for minimal data storage instead of application work.

So here I sit, with a good computer box that has antique software, with a disk drive not big enough to load another application on, that I wouldn't want to give to anybody I know. To make the thing work properly, it needs a new disk drive and a new operating system, which makes the box an ideal candidate for the scrap heap as the price of those two items will push it's cost to operate close the price of a new computer, and the new computer would work right out of the box, not require substantial time to replace the small disk drive and load new software.

So with tail tucked between my legs, I drove over to the neighbors to explain that I was an SA (Stupid Ass) by opening my mouth before checking to be sure what I was offering was indeed something that I should offer. I told them they were still welcome to the box, and if they knew anyone that was computer savvy and wanted a challenge, this would likely be a good candidate, but as far as I was concerned, it wasn't worth the investment on a used piece of equipment like this.

So I'll be moving the old computer into storage, just in case I run into someone that needs some spare parts. A good power supply, motherboard with Pentium IV processor, and associated equipment might be useful to someone else, but for me, I think I'll put the keyboard up on the wall as part of a therapeutic regime for my foot in mouth disease.