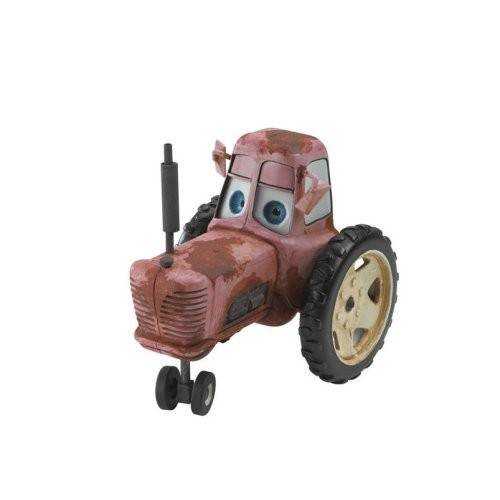 I've heard of cow tippin' before... whether or not it is true is up for debate as far as I'm concerned as I've never heard anyone actually admit that they have gone cow tippin'. I'd guess if true it must involve sneaking up on the cow. What brings this to mind is a movie that Margie and I enjoyed on TV so much this week that we got a chance to watch it twice and did. I'll watch it again too!

The story largely takes place in a rural town called Radiator Springs, the best little town in Carburetor County. Part of the plot involved tractor tippin', and as long as Frank doesn't catch you, it actually looked like it might be fun. The little town was once a thriving community until circumstances beyond its control found most residents moving away, much like many small Nebraska towns. A set of extraordinary circumstances brought the town back to life.

The computer animated Disney/Pixar film "Cars" is the show I'm talking about, and though I'd never have guessed I'd enjoy this show as much as I did, I'm recommending it as a really fun flick and hope if you get a chance to see it that you do. The rural setting of the town, the characters that inhabit the town, and the good versus evil plot is hard to beat. A love story is part of the story as well, and the classic conflict of youth and age is integral too.

I don't know if kids liked this movie much or not, but it sure has plenty for an adult to enjoy. The primary characters included Sarge the owner/operator of the Army surplus store, Fillmore the hippy selling organic fuel, Ramone the low riding customizer and his wife Flo, Sally Carerra, "Stickers" McQueen, Doc Hudson, and Mater, the best backer upper in the world. It's Mater that introduces us to tractor tippin'.

From the real world, the cast is pretty impressive with some of the voices provided by Paul Neuman, Owen Wilson, Cheech Marin, Michael Keaton, John Ratzenberger, Jay Leno, Larry The Cable Guy, George Carlin, and even racing legend Richard Petty and his wife get in the act.

Those tractors that get tipped are 1950's era Chew-All's, but the rusted red paint would suggest to me Farmall. Not many brands were ignored in this movie... Ford, Chevy, Dodge, Honda, Plymouth, Renault, Mack and Peterbilt trucks, and even Ferrari were represented. The movie has some great one liners, and if you don't pay attention, you for sure will miss some.

Around our place, the landscape is almost completely worked over by green machines, so perhaps JD's are not susceptible to tractor tippin', but if Frank, the big red machine after our hero is even 1/2 as fast in real life... watch out! The movie even inspired a kids board game called... Tractor Tippin'.

So next time you see this show on the TV schedule, or see it in the video rental place, I recommend you take "Cars" home with you. You may just find yourself saying... "Well dip me in axle greese and call me slick".