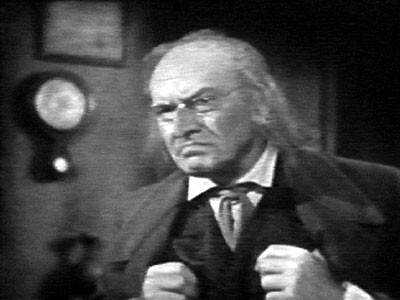 Bah-Humbug! Fredrick March as Scooge from 1954

Our latest adventure involved a Rocket, and ended in London. Indianola has some of the best pizza found anywhere in our opinion. Now I know that pizza, like Mexican food, have their loyal followers and me saying The Rocket Inn in Indianola has the best pizza will likely get me corrected. To be fair, we haven't been to many other pizza places in the area. With that in mind however, The Rocket gets our double thumbs up recommendation. If you do know of a better place for pizza, or at least as good, please let me know!

Next it was off to McCook to see "A Christmas Carol" at The Fox. We got there a bit early so we window shopped the stores along George Norris, and found that Brown's Shoe store was one of the few open. Big mistake for my wallet as the first thing I saw was a pair of winter boots for Margie. You need to know that she has a hard time finding shoes and boots with her size 5 feet, but the pleasant fellow in the store had just what she needed and out the door we went with a new pair of winter boots.

We wandered around a bit more and I admit to being a bit surprised that more stores were not open on a Friday night, especially with a play in town that night. It probably saved me some green because they were closed.

We noticed that quite a line was at the theater so we unloaded our package in the car and headed into The Fox. I was sure surprised from the get go by the gal in the box office when she said she enjoyed reading my blog! Yikes, I had no idea anyone would recognize me from the picture that shows up on the Gazette web site. Margie figured it out that not a lot of guys have a hat like mine with a beard, so she had pretty good odds of being correct.

We walked into the old building and sat down in the the back half of the theater. What a cool old place! Reminds me of theaters in Omaha when I was a kid. They sure don't build 'em like that anymore! The place filled up too! I only saw one vacant seat anywhere around us, and though I saw a several of the younger persuasion text messaging before the show, I didn't see any of that use during the show, and not one cell phone went off around us.

The play was great! The talent shown by the cast was first rate in our opinion, and we look forward to seeing more of the college drama groups productions in the future. The costumes fit right in with old London, and the sets used for the show added to the sense of time travel with office, city, and bedroom scenes well portrayed. I especially liked the smoke illusion when the ghosts departed!

I said to Margie on our way home that if we were still in Denver, we could have easily spent twice the amount of money and not had nearly as much fun. We would likely take twice the amount of time to get home with four times the risk of being involved in an accident. Yep, we figure we're pretty darn lucky to be living in the greatest part of this great country of ours.