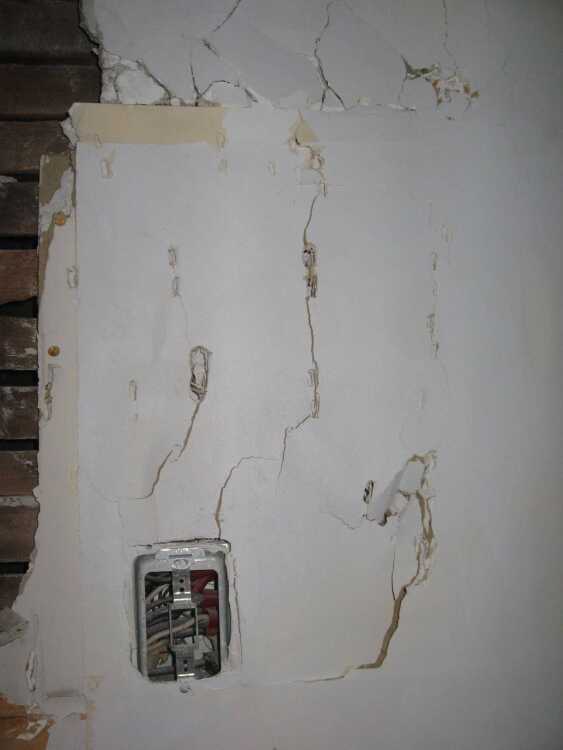 I Never Know Quite What To Expect Around The Farm...

I've been working on installing an inside door in the farm house the last couple days. Now I admit that I'm taking my time... that is to say I do just a little bit of the job each day since I apparently like to stretch out projects as long as possible. This is turning out to be a bit more work than I first thought, but I will succeed sooner or later, but I'm beginning to wonder how much later the more I get into the project.

In the past, the house was lifted and a basement put under it. Somebody spent a heck of a lot of money working on the place, but somewhere along the line, the interior house doors disappeared to everything but the bathroom. I have no idea where they are for sure, but it looks like the barns hay storage floor is partly made of them laying across the rafters. Most people, us included, want interior doors especially when guests arrive as it's nice to be able to have a bit of privacy, but someone in the houses past didn't see the need for them I guess.

Anyway, I measured and picked up some new doors a while back that were on sale at that "Save Big Money" place, and now that the cooler weather is here I thought I'd get 'em installed. First up was pulling off the old door trim. As soon as I started I knew I was in for a battle of sorts as crumbling plaster came out of the spaces the trim covered.

It didn't take long to figure out a major change that had been made to the house. Built in 1925, this old house had lathe and plaster walls, and when the house was lifted, I think the plaster cracked so badly that the owner decided to just cover all the old walls. Inside all the bedrooms drywall was installed and looks pretty good. In the living room, dining area and kitchen, wood paneling was installed over the plaster that needs some help. My problem was that I had to remove the old door frame and some of the paneling to install the new door, and that opened up the wall. The first piece of door frame I pulled down brought with it a cascade of plaster and an accompanying cloud of dust that covered everything... including me.

The farther I got into the project, the more I wondered what the paneling installer was thinking. Around the door frame, over 100 small nails held paneling to the studs and I had to remove the paneling to remove nails that had been driven into the door framework. This guy loved nails and I'm naming him the Hammer Master for all the work he did putting in so many nails. I'm afraid I'll run into the same scenario of nail overkill on every other door I have to replace. Of course every time I had to pull another nail, more plaster would find its way onto my head.

To shorten the story a bit, I got all the nails removed, fished a couple walls and installed new electric wiring and outlet boxes so I could move the bedroom light switch to the other side of the doorway, pounded the wall back together and vacuumed 3 Shop Vac loads of broken plaster and dust. Today I hope to get the new door frame installed and stained and the first coat of finish applied. By the end of the week I expect to have the first door replacement completed and new trim installed.

I now realize that the Hammer Master was in cahoots with that other guy that lives around here... Murphy. You can read my previous blog about me and Murphy if you missed it at... http://www.mccookgazette.com/blogs/hoag/entry/20948/