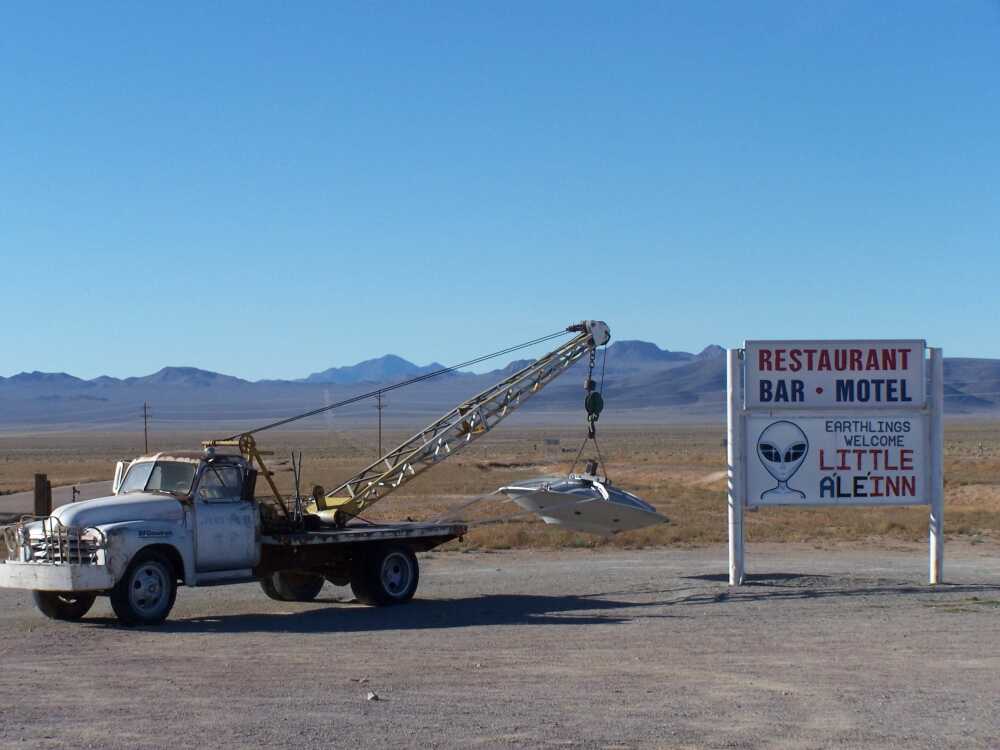 UFO On The Hook!

During our 5 years of RV living throughout the west, we saw some pretty fantastic scenery and not just a few odd sites. Traveling across remote sections of Nevada, we were "buzzed" more than once by unusual aircraft, and lights we occasionally saw in the night sky would certainly make most folks think of UFO's. The above picture for example was taken along the ET Highway in Nevada near Area 51.

One of the strangest night light displays we witnessed was in southern Arizona one night as a line of lights appeared in the sky. Many of you may have heard of the lights a couple years ago over Phoenix that the military admitted were their doing, but we were a long way from Phoenix camped out in the middle of nowhere. Since this was so uncommon to us, I asked some locals in the nearest town if those lights were common, and it turned out they were. The government had some type of incendiary dropped from aircraft that would light up the ground over a large area at night that they used to help fight smuggling and capture illegals entering the US. Another mystery solved!

We've been on the farm now for 11 months, give or take a few days, but we've seen no UFO's until a couple nights ago. First off, you need to know that we're at the end of the Cambridge airports runway. Well not exactly at the end, but a couple miles away so we see a few planes take off and land, and it's lit up at night so we can see the beacon from the airport and some of the runway lights.

The other night was different. We were eating supper after dark, and I noticed some lights near the airport that were not there before. To make things more interesting, they appeared at first to be stationary, then they started slowly getting closer... or at least that's what it looked like for a short amount of time. The distance between the lights slowly widened as if a slow moving aircraft was coming towards our place!

Well, to make a short story shorter, what we saw was a farmer harvesting in the dark and one set of lights was the grain truck the combine was dumping into, the other set of lights the combine moving through the field. This is another new occurance around here for us, but I sure understand why they do it. It's funny how the mind can play tricks on you based on previous experiences, and the last thing on my mind to start with was night farming operations.

Do I believe in UFO's? I guess I figure they are possible especially after seeing some of the stuff I've seen in the night skies. Maybe I have seen a UFO, or perhaps what I've seen was really swamp gas refracting the light of Venus during some atmospheric phenomena making me think I saw something that really wasn't there... the jury is still out on that one.