The End Of Time 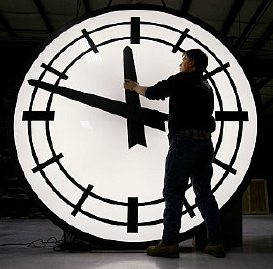 Today is the end of time as we've known it... at least since last March. Yep, this is the last day of daylight saving time and tomorrow we go back to good old standard time. As for me, I like daylight saving time and wish they would leave it alone. Tomorrow will get dark pretty darn early to my way of thinking, though I could just as easily adjust my internal clock and get up an hour earlier and go to bed earlier to make up the difference, I'd miss the 10PM news if I did that.

So today is a little history primer about daylight saving time. It was first proposed by our friend Ben Franklin in a 1784 essay called "An Economical Project" and you can read the full text here... http://www.webexhibits.org/daylightsaving/franklin3.html

First, a little history about time in general...

The British were the first to come up with standard time instead of solar time which was based on the sun and where the term high noon came from as noon was always when the sun was highest in the sky. It was also called solar time back then, but the British railroads wanted a reliable way to keep track of train schedules and the varying time afforded by solar time didn't work well. The use of standard time started in London in 1840, but wasn't fully implemented in England until 1880. At least one of the clocks in England even had a different set of hands to indicate solar time and standard time using the same clock face.

In the US and Canada, standard time using time zones became official in 1883 thanks to the railroads again. Not everybody was totally enthused with the idea as Detroit for example maintained solar time until 1900 when they shifted their time to Central Standard Time by changing their clocks 28 minutes.

Daylight Saving Time has been around since 1916. It was thought to save fuel used to generate electricity and it quickly was adopted in Europe. DST wasn't adopted in the US until 1918, but it had a rocky start. After only two years, the law that established it was repealed and DST was left as a local option with only a few states keeping it during the summer months.

During WWII, FDR instituted year around DST called War Time and this continued until 1945. After that, individual states could decide if they would use DST and when it would start and end. This caused confusion as different states had different start and stop dates that made it difficult for any business with a multi state schedule such as railroads, buses, airlines and broadcasters. It wasn't until president Nixon signed the Emergency Daylight Saving Time Energy Conservation Act of 1973 that everybody in the country got on board with DST.

But that's not the end of the story... Not all states use DST. Daylight Saving Time was extended to the first Sunday in November just last year to make trick or treaters safer as Halloween night had 4 times the pedestrian accidents as other nights with all the kids out in the dark. During Viet Nam, DST was used as a loophole for the draft in some cases based on what day you were born because of DST, and even terrorists have been killed setting timed bombs that went off on Daylight Saving Time when the bombs clocks were set to standard time. Violent crime is lower during DST, and legal cases have even been decided on when something was scheduled on DST such as a sprinkler coming on after a car crash, but the sprinkler was set for standard time.

So maybe I should have titled todays blog the start of time instead. If I can just remember to set my watch before I go to bed tonight, the start of Standard Time won't make us late to church tomorrow.

These are just some of the highlights of DST, and there is a lot more interesting information available at... http://www.webexhibits.org/daylightsaving/