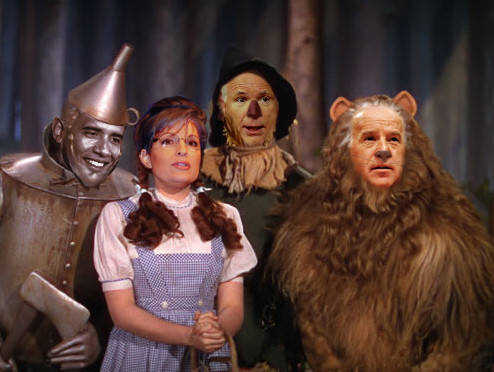 Look closely at the above faces...have you seen these people?

The people shown in the above photograph are wanted! Not by everyone to be sure, but when split up in pairs, one pair will be shown to be wanted more than the other pair by a majority of the people of this great country.

For me, this election cycle has generated some very strong feelings and conradictions, and I've noted a lot of people are just as concerned from comments made here at the Gazette and across the Internet. Whether you are conservative leaning, Independent, Green, Nebraska, or are oriented more to the left, we're fortunate that we are offered the chance to make the majorities voice heard around the world.

The planet looks at the USA differently than any other country. We're thought of as the most powerful and influential nation on earth, so what happens here effects just about everybody else. Our enemies and friends alike are paying close attention to the outcome of our election as it impacts our foreign policy and economy in ways that I think most Americans don't fully understand in a global environment.

So come next Tuesday, I hope you will get out there and vote for the person you feel most qualified to lead our country for the next 4 years. I have made my choice and will voice my opinion with my vote on election day... I hope you do too!

I received the following link from a liberal friend of mine but the underlying premise goes both ways and can easily go the other way... GO VOTE!