Words That Start With "S" 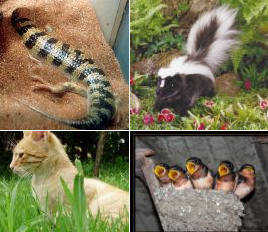 There is a popular game show on TV that asks questions of all types, one of which is "Words that start with", and plug in a letter and they have probably covered it. So with that in mind, today's blog topic is animal names that start with S around our farm.

First up for $100... What is another word for a feral cat? The answer is... stray. Almost from the first day we bought the farm, we've had a Tom cat visit every couple weeks. We've given him the name of Yellow Tail as he has been here so frequently, and lately he's been taking up residence in the refurbished barn it seems. Not only that, but he now has a girl friend with him that I've been trying to shoo away so we don't end up with a flock of kittens hanging around. My last attempt involved a walk where the cats followed us down the road to the next vacant farmstead. Once there, I did everything to scare the cats into the brush, and though Yellow Tail has visited once since then, I've not seen his girl friend again.

Next question for $200... What birds live in barns (and other places) and are considered "swift fliers"? The answer is... Swallows. We had at least 10 Barn Swallows living on and in our barn this summer, though they have all moved on in the last week or so. These little guys are a lot of fun to watch as they are quite the aerobatic flyer's.

Words that start with S for $300... Besides snakes, what other reptile has a name that starts with S? The answer is... Skink. These lizards are very common around the farm we've discovered. My first encounter scared the heck out of me as I was moving a pile of brush. One of the larger variety of Skinks moved in the bush and I thought is was a big snake to start with, only to find it to be the biggest lizard I've personally encountered.

Next question for $400... What insect family has 8 legs? The answer is spiders. We've got spiders of many types around the farm. The Wolf spiders get me the most as they are so fast and BIG. I don't like spiders and snakes you see, but at least we seem to be knocking the spider populations down around the farms house. Now snakes are a different story completely. I may go into that some other day but not today.

And finally for $500, what animal do people and other animals try and avoid? The answer is skunks. A couple times in the last week I've spotted the black and white relatives of the weasel rooting around our yard just before sunrise. Now I enjoy watching wildlife as much as anybody, but I don't really need these guys in the yard, though they do seem to provide the benefit of lawn aeration as they like to dig.

So that's it for today... Brian's game show of the week recap. Stay tuned for future tails (tales) from the farm(stead).