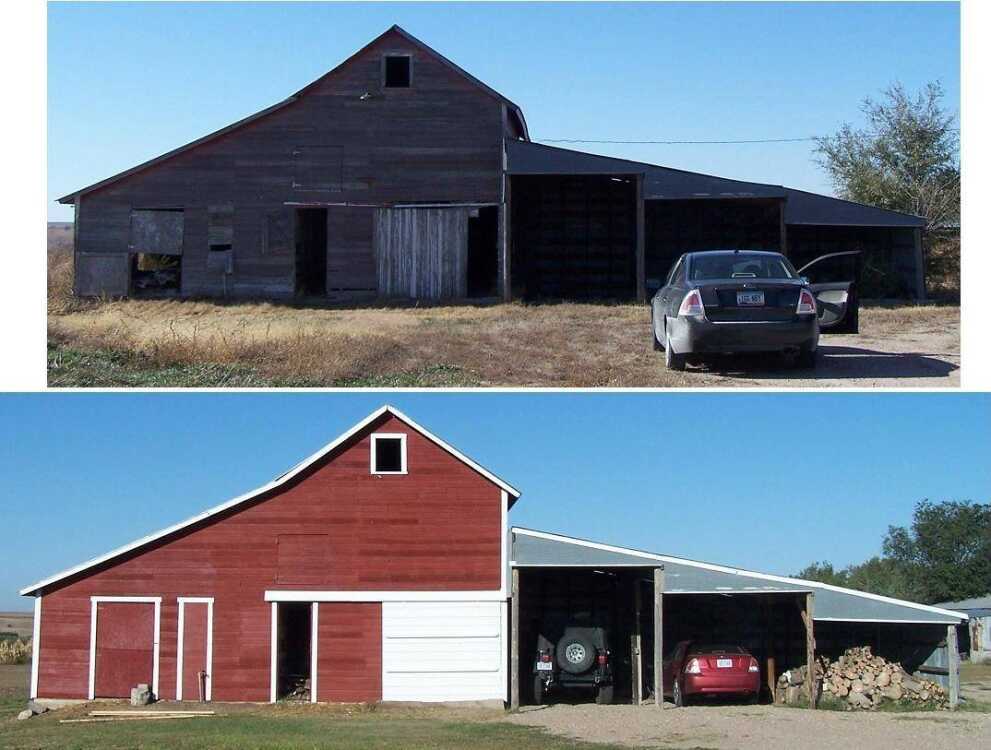 I remember one of my new year resolutions last January was "Clean, repair, and paint the barn. This may be a job that extends beyond this year". It's convenient for me that the Gazette has all my blogs archived as I would never have remembered the exact phrase used, but when I looked it up I got a bit disheartened as I'm not doing so well on some other resolutions. More on that later.

As those of you that follow the City Slickers know, we've spent a good portion of the summer working on the barn. Now I will be the first to admit that I have spaced apart the work done as best as I could so as to not burn out on the project, and we had major help from Margie's family from Colorado territory. The old barn sure looks different than the day we made our offer for The Farm(stead). I've got a few small things to wrap up like getting the hay loft windows located if there are any, and getting one hinge and a couple of boards attached to doors on the back of the barn and painted, but that's it!

We'll be running our own test of barn red paint. I've heard paint doesn't hold up too well around here, but we're hoping we don't have to paint more than every 5 years or so. The old siding really swallowed up the paint, but we did our best to put plenty of the red stuff on to really soak into the cracks completely.

OK, so the barn is pretty much done which was high on my list of things to do this year. Where I've fallen behind is going to baseball games and I guess I waited too long now though we've been to Cambridge home football games. Getting organized is well behind schedule as is building a new bathroom and remodeling another. Beyond that, I've loafed my way through my list of things I planned to accomplish.

And the best part of all this is the year isn't over yet! I've still got time to catch up on quite a few things I want to do. Our priorities shift back and forth around the place as we get more and more used to how we think we'll live out here in the country. It's been 9 months already and I can hardly believe we've been here that long. Summer is over and I have no idea where it went.

I have a bad feeling that I won't get the bathrooms completed as resolved, but we'll see how far into the remaining construction projects we get before the end of the year. With the weather cooling off, the weed war is about to have a seasonal shutdown and I hope to make some good progress. Now if it just wasn't for football on TV, I might have a chance.