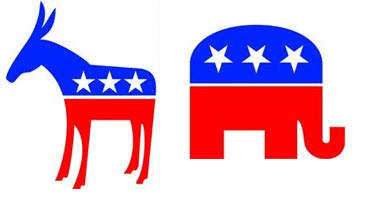 Politics sure bring out the biased side of folks, no matter which side of the political fence you sit on. I've spent an inordinate amount of time reading as much as I can about our primary choices for the leadership of our country, but making a decision isn't real easy for me. I don't necessarily follow party lines, and I, like everyone else, has an opinion about what I think our country needs to, or should do to improve our world status, put our economy back on track, and generally provide the types of services and leadership of our country I think necessary.

Change? Yep, I think everybody thinks some things need to change, and both parties are embracing change now. Experience? Yep, there are questions on both side of the fence regarding the respective candidates. Age? Yep, it's mentioned against both sides of the fence as an extension of experience and longevity. The media? Yep, I wonder if these guys are watching the same interviews I watch, 'cause it's pretty obvious that depending on who is doing the interview evaluation, the story, while generally factual, can be persuasive and slanted to the left or right easily. Rarely do I read an article I consider unbiased one way or the other.

How you say and present things is more important than the facts it seems, and if you spend much time on the internet reading up on the candidates and the responses to these articles, it's pretty obvious that name calling and misleading information is rampant all in the name of getting the facts right.

So today I've decided to present a couple of unbiased facts that you might want to know...

The Republicans say their elephant is strong and dignified, and Democrat's say the donkey is smart and brave. OK, so why do they have them anyway? They go back to 1800's politics, and were both made famous by cartoonist Thomas Nast. It seems the donkey came first when Andrew Jackson's opponents called him a jackass. Jackson used the animal on his campaign posters to show his strong will, and Nash popularized it in his newspaper cartoons. The Republican elephant showed up in Harper's Weekly years later in another Nast political cartoon and has stuck ever since. Source

Facts are facts so there ya go, unbiased reporting from The City Slicker.