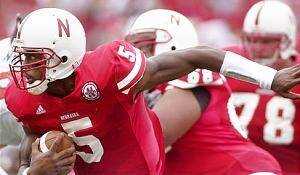 Cornhuskers do it in the dirt!

November 25, 1971 - My family moved to Colorado in 1968, but my love for the Cornhuskers never faded, and I was certainly not disappointed on that day. It was Thanksgiving, the #1 Huskers were playing the vile #2 Sooners of Oklahoma in Norman, and what ensued is the stuff of legend. "The Game Of The Century" it would become known as, and long term Husker fans will never forget it. Nebraska 35 - Oklahoma 31.

January 26, 1998 - The Denver Broncos were big Superbowl XXXII underdogs against the Packers of Green Bay that day. It was the Bronco's 4th shot at the NFL championship title and John Elway's third trip. Bronco fans were scared. You see, Bronco fans are different than most...we bleed orange and blue, or so we like to say, and having been defeated in each of our previous trips to the big game, we were pretty sure another trouncing was likely a matter of 60 game time minutes away... still we watched. The game was considered at the time the greatest Superbowl ever with the Bronco's winning after Bret Favre's 4th down pass was tipped away with 32 seconds left. Denver went wild! Broncos 31 - Packers 24.

September 5, 2008 - It was a beautiful night for football in Cambridge as another high school football season got underway for the Trojans. The Blue Hill Bobcats rolled into town hoping to beat the home team, but it didn't work out for them on this evening. The Trojans defense was tough shutting out the Blue Hill offense with only a blocked punt in the end zone for a safety to show for the Cats scoring efforts. Cambridge 19 - Blue Hill 2.

Last night was my first Nebraska high school football game in nearly 40 years. It's the first small town football game I've been to ever, and I can't help but make some observations. We got to the game about 4 minutes into the 1st quarter and got to sit on the 45 yard line right next to the band. The running track surrounds our towns football field, and many folks watched the game from the sideline on the track, moving up and down the field with the teams. I'd forgotten high school football game quarters are 12 minutes long. Halftime found each team in an end zone instead of a locker room as is common in large venues. The most common penalty was offensive holding. Many players work both sides of the ball, that is to say they play offense AND defense. The fans are polite, not boisterous.

It's not whether you win or lose, but how you play that's important around here and sportsmanship is at the top of the totem pole as it should be. No boos or vulgarity, only the appreciation of a good effort by both teams.

After the game, one of the folks we know in the area asked if we had a good time, and the answer is YES! I may have to tone down my enthusiasm during the game around here as I get pretty excited and loud, and I don't want people to think I'm crazy, but once I get my orange and black attire acquired, folks on the Cambridge side of the field will without any doubt know a new supporter has hit town, and he loves THE game of football, whoever wins.