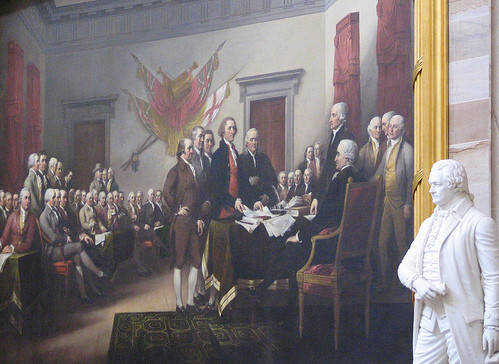 I was watching a movie on TV the other night called National Treasure. It's a pretty good action flick about treasure hunters looking for a cache of items collected by the Knights Templer and acquired by the Masonic founding fathers of the USA. The founding fathers left clues about how to find the treasure, so our heroes searched through historical artifacts including the Declaration of Independence to try and solve the mystery. I won't divulge if they got the gold, but they made a statement about the men that signed the Declaration that is true.

Had the colonies not defeated the British during the Revolutionary War, the men that had signed the document that got this country rolling would have all been executed (by some rather grizzly means) for high treason. I'm sure glad they put their lives on the line so we can enjoy the liberty and freedom they envisioned for our country.

Times sure have changed since then! I watch Cops on TV now and then, and it amazes me that crooks give up their rights instantly and allow a search of their vehicle, and of course the bad guys always have contraband in their car. If the perpetrator tries to object, the authorities say "if you have nothing to hide, why not let us search?", and the crook gives in. Another liberty gone because of ignorance? Maybe, but I suppose most folks think it's great that the crooks get busted.

Recently Google, the largest internet search engine was forced by the government to supply records of what we look up on the internet. Telephone companies have had special legislation passed to exempt them from lawsuits arising from government wiretaps, and special software has been developed to monitor the internet for "red flag" words and phrases with the reasoning that terrorist attacks can be averted. This is probably true too but I wonder...

I agree with old Ben on this one. What are we willing to let slip away in the name of National Security? Only you can decide what is important to you and what you are willing give up, but I hope you will keep in the back of your mind that those that signed the Declaration of Independence risked their lives for liberty and freedom and we owe them by sustaining the ideals. Is it possible that government of the people, by the people, and for the people is slipping away?