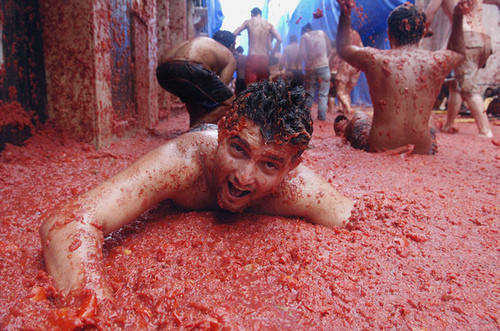 That's the date that CBS News reporter Dan Rather reported on the Colorado tomato wars held in the town of Twin Lakes. It seems that a fellow named Tayor Adams started the wars in 1982 as a protest against Texans in Colorado who were, in his mind, constantly trying to change the environment of the state. A bunch of Coloradans and Texans got together and threw tomatoes at each other until everybody was out of tomatoes. This annual event went on for several years with the winner declared by whoever had the least amount of tomato damage inflicted upon their team. Varying strategies were employed with varying degrees of success, but getting dirty was always part of the plan.

I have no personal knowledge of this occurrence so it may not be, but it is rumored that there is an annual tomato war of sorts right here on Road 409. I was told about some neighbors, whom will remain unnamed, that go toe to toe to see who can grow the first tomato. Perhaps going to the extreme of getting up early in the morning to get the best selection of tomato plants at the store as there might be one with a bloom on it already! Dirt is involved, but it's not a dirty war at all, just good natured fun between friends.

Margie is engaged in her own tomato war at the time. Actually this war is being waged over tomatoes, not with them. Since our tomato plants were planted about a month behind most other peoples in the area, we're just now starting to get our first tomatoes. Unfortunately, grasshoppers and other invaders seem to like them too, so a constant battle between her and them is underway. Dirt is involved to some extent.

With all the dirt on the airwaves right now, it must be an election year. McCain and Obama have not been officially nominated by their respective political parties yet, but everybody knows it's them so they're really into the battle now. I was really hoping for a realistic debate of the issues, but the road to the White House seems to be paved in mud, and there is never a clear cut winner in the slinging contest in my opinion. The real messages of the election are buried below the negative rhetoric, and it's pretty well documented that even though we don't like negative campaigns, they work. One thing Bill Clinton said that is obviously true about presidential elections is that "politics is a contact sport".

With all the tomatoes available just on Road 409 this year, I wish McCain and Obama would show up and have their own tomato war instead of the mud slinging affair going on right now. I'd love it if all the negative campaign crap was summed up by the two presumptive candidates being covered in rotten tomato guts, instead of listening adnausium to their double talk, half truths, and scare tactics. They would both look about as clean as they do now... figuratively speaking.