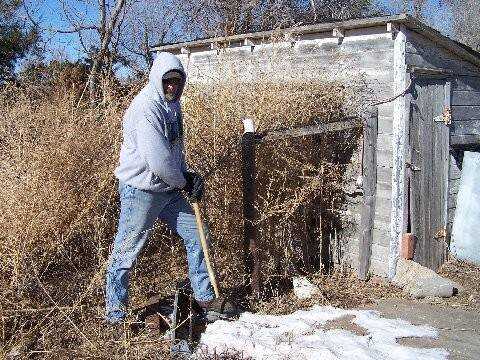 One thing we've discovered is this is the perfect time of year to chop dead weeds around the farm. With the freezing temperatures, our weed whip has been clearing pretty good sized patches of weeds and brush at a time, and we've been burning large quantities of the dead stuff a little at a time in a 55 gallon barrel.

We've decided we're in a long term war against weeds on the farm. We're winning the battle at the moment, but the opposing army's logistics are not organized, and won't be until Spring. With thawing temperatures, I'm afraid the devils will attack in full force, and our only advantage may be the fact that we've beaten back last years "defenders" of this upcoming years crop.

We're also discovering what our farming neighbor meant when he asked if we had a metal detector. As we hack through the weeds, we've come across angle iron, partially buried fencing and wire, and at least a hundred old 3 pound coffee cans with both ends cut out. I have no idea yet as to the purpose of the cans, but I hope someone will give me their ideas.

So for now, the Grim Weeder is winning the battle...sure hope he can win the war of the weeds.