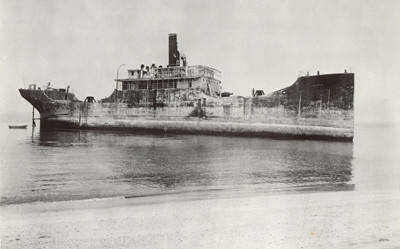 When we were liquidating our possessions in anticipation of hitting the road full time, we sold a book that I know will be needed on the farm. As I mentioned in an earlier post, this isn't our dream home...yet. To transform it, I'll need a bit of help, so I dropped into a large Denver area bookstore and picked up a home improvement manual. Now if you have not seen one of these books, they provide detailed information about just about every phase of home renovation and construction.

As I was thumbing through chapters from plumbing to masonry, in the concrete section of the Creative Homeowner Home Repair and Improvement book, I came across a picture of a grounded ship sticking out of the water with the following caption... "Don't feel too bad if your concrete patio is sinking. The S.S. Atlantis is an entire concrete ship that's sinking, off the coast of Cape May Point, NJ. Built as an experiment during WWI....". The caption goes on to describe how it failed because of weight...duh!

Just kidding about the "duh" part as new technologies have plenty of flubs before success, but a concrete ship? Not only were these ships used during WWI, but they were used during WWII as well! You can read more about this and other concrete ships at:

Yesterday I called my Mom for Thanksgiving and asked if she had heard of ships made of concrete...smart kid I am, I figured I'd be giving her some new information. NOT!

Turns out that she read about 'em in Reader's Digest. I'm still surprised that I learned about these ships in a home improvement manual though.