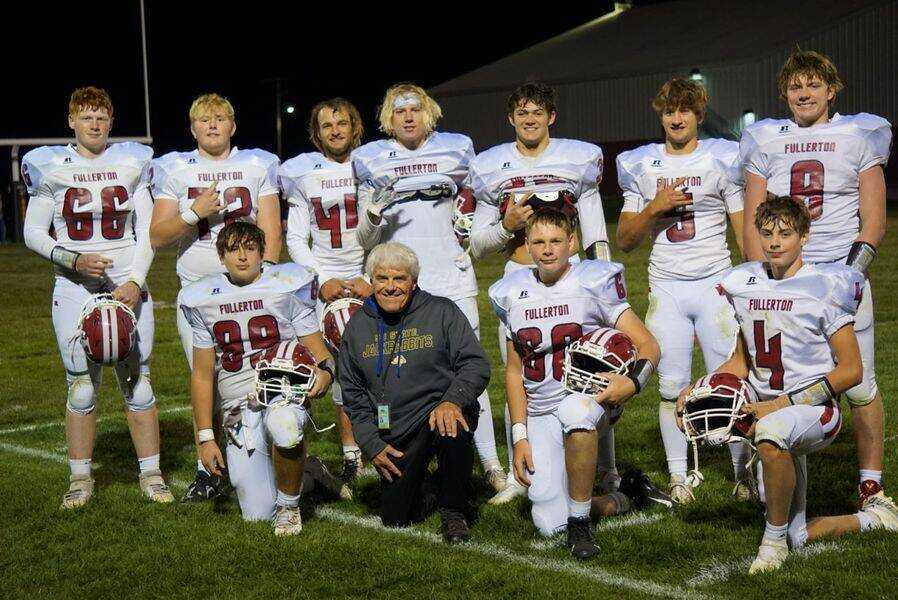 On the first crisp high school football night of the 2022 season, the Fullerton defense had to overcome a second quarter lapse that saw two consecutive Giltner scoring drives, buoyed by some nifty running by junior Phillip Kreutz.

Although the Warriors were never in danger with a 32-0 lead at the time, it seemed as if the Fullerton “D” was suddenly out of position and a running back (Kreutz) who had not carried ONE time this season, was running through a normally steady Warrior defense like a 1000 yard rusher.

Kreutz was so dominant in that second stanza explosion, that the Hornets junior reeled off 125 yards on 16 carries with two touchdowns, just on two clock gobbling possessions alone, closing the score to 32-16 at the halftime break

The second Kreutz touchdown, that came with no time showing on the scoreboard clock, was soon forgotten and ancient history as the Warriors came out in the second half and dominated, holding Kreutz to a meager 6 yards on 7 touches.

Fullerton, who has a slew of walking wounded, including speedy junior Aiden Norman (494 yards rushing/7 TDs, 23 tackles/2 INTs/2 recovered fumbles), and defensive ace Brett Bridger, was off and running early, with Fletcher Dubas scoring the first two touchdowns of the game on short runs.

The Warriors defense also put some points on the board in that opening frame when big Jarrod Land broke through to plant Giltner QB Ethan Ballard to the turf for a safety.

The Warriors lead ballooned to 32-0 before Giltner turned Phillip Kreutz loose to close the halftime gap to 32-16.

Kreutz is quite a story. Tonight was the first time the Giltner junior appeared in a football game this season. The necessity to press him into action was caused by the loss of Hornets top two rushers, Preston Larson (6-0, 180, Jr) and big, bruising fullback Taylor Smith (6-1, 215, Jr).

The pair had accounted for 62% of Giltner’s rushing yardage coming into the game and 30% of the Hornets tackles on defense.

Brady Cook’s pair of third quarter touchdown runs (2, 23 yards) and the Dubas to Voichahoske scoring strike, moved the clock into running mode with two minutes left in the third quarter, as the Fullerton lead widened to 52-16.

Young Dubas and Max Voichahoske would hook up one more time in the 4th quarter before the reserves took over for both sides.

Giltner freshman Eli Bish added some glory to that well-known Bish name when he swept around his left end, turned up field, and out-sprinted the Fullerton defense for a sparkling 59 yard scoring jaunt.

Dubas was simply lethal through the air, connecting on 5 of 8 passes for 114 yards and three touchdowns. On the receiving end, Brady Cook led the way with a pair of catches for 55 yards and a TD, Tyler Gochenaur also reeled in two Dubas aerials with both going for scores (18 and 11 yards), while marvelous Max Voichahoske had but one reception, but made that one count for 30 yards and a score.

Fullerton ended the night with 275 yards rushing and 114 passing.

Giltner’s ground attack was led by Phillips Kreutz, who ground out 131 yards on 23 totes and 2 TDs. Hornet quarterbacks combined to complete just 2 of 13 passes for 24 yards.

Giltner ended the night with 219 rushing yards and those 24 yards through the air.

Fullerton (3-4), is currently ranked 30th in the Class D-2 wild card race and will try to secure a post season playoff slot next Thursday when they close out the regular season at home with 3-3 High Plains Community, who will face powerful Osceola on the road Friday before closing at Fullerton next week.

Giltjner closes out their 2022 regular season next week at Palmer.