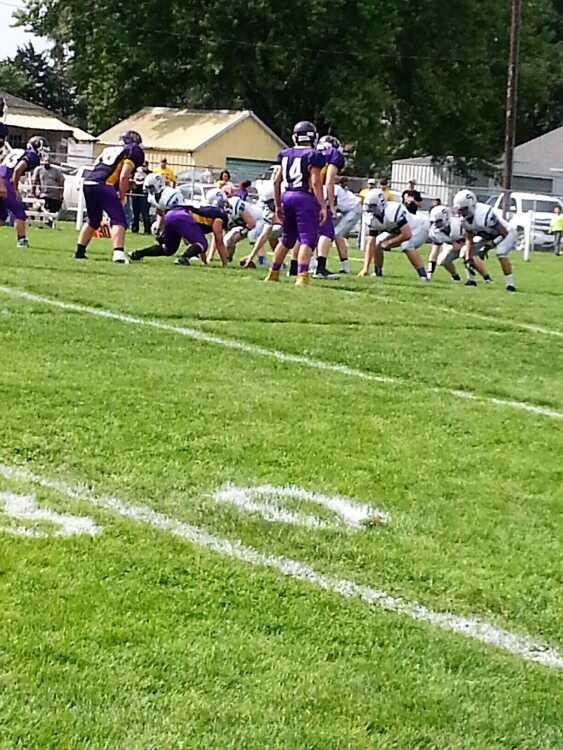 *Zephan Kluthe-Cedar Bluffs - And they said it couldn't be done. In all my 55 plus years of charting Nebraska high school 1000 yard rushing backs, I have seen ONE player gain a thousand yards rushing for a WINLESS football team.

The second year (1976) I published my Bobby Mills 1000 Yard Club, a running back by the name of Tim Kayton gained 1,065 yards for a Cedar Rapids Tigers football team that never won a game that year.

Forty five years later in 2021, Cedar Bluffs quarterback Zephan Kluthe, a burly, but fast for his size, 5-11, 215 pound bull, duplicated the feat and then some. In a regular season finale 68-36 loss to Elmwood-Murdock, Kluthe took off for 269 yards and 6 touchdowns on 31 carries, swelling his SIX game, 2021 season rushing total to an amazing 1,185 yards.

Here is the game by game breakdown of Zephan Kluthe’s 2021 season:

Hey, I’ve been around long enough to know that many of these yards were accumulated when Cedar Bluffs opponents removed their starters from the game because of big leads, but it takes a lot of courage for anyone to continue to play hard and strive to do their best and respect the game like this young man did.

Zephan Kluthe, you accomplished something only one other back in history pulled off, rushing for 1000 yards for a team that never hit the win column. Kind of a good news, bad news thing I realize, but this is one time where a player can take solace in individual stats.

Big deal? It certainly is to this guy. High props to you my friend!

*Gage Fries-Minden - It’s been a relatively quiet rushing year for Fries in 2021 but that changed in the Whippets 48-8 win over Wood River-Shelton. Gage gauged the Silverbacks for 203 yards on 16 carries and touchdown. 5-3 Minden closes out the regular season with a HUGE home game with Broken Bow with the winner guaranteed a spot in the 2021 Class C-1 playoff field that begins next Friday.

*Karter Kerkman-Norfolk Catholic - Junior standout ran for 98 yards on 13 carries with scoring jaunts of 10, 37 and 14 yards in Catholic’s convincing 41-13 win over Crofton. Kerkman now has 1,038 yards on the ground. Welcome to the Bobby Mills 1000 Yard Club my friend!

*Hyatt Collins-Adams Central - Junior star running back returned from an injury to score all of his team’s touchdowns in the Patriots 24-0 win at St. Paul. Collins raced for 185 yards on 33 carries with scoring runs of 2, 1 and 35 yards. That not only wrapped up the District title and secured a playoff spot for A/C, and gave Hyatt 917 yards (11 TDs) in his injury shortened 2021 season.

*Jimmy Allen-Crofton - The Northeast Nebraska standout rushed for 130 yards on 29 carries with TD runs of 4, 5 yards in Crofton’s 41-13 loss to Norfolk Catholic. Allen, who missed some time with an injury, now has 944 yards (9 TDs) after bolting for 1,402 yards and 23 TDs a year ago. This dude is literally unstoppable in Crofton’s tight, rugby scrum-like double wing offense.

*DeMarco Young-South Sioux City - Sped for 182 yards on 19 carries in the Cardinals 49-7 loss to Gross Catholic. Hey, you think this kid can’t run the football? Think again. Young, despite playing for a 2-6 football team, has compiled 1,173 yards rushing thus far in 2021.

*Gage Racek, Dylan Hurlburt-Ord - The Chanticleers 1-2 rushing punch was alive and well in Ord’s 56-0 win over Centura. Quarterback Racek gained 135 yards on 13 carries with a pair of TDs, while sophomore back Dylan Hurlburt wasn’t far off with his 119 yards and two TDs on 10 totes. Racek now has 983 yards rushing with one regular season game left with Hurlburt not that far back with 908 yards.

*Micah Moore-Fremont - Bad news: Moore was held to 34 yards on 21 carries with no touchdowns in Fremont’s 35-20 loss to Omaha North. Good News: Those 34 yards lifted the hard running Tiger back over the 1000 yard rushing mark for the second consecutive season.

*Nate Pederson-Millard West - The unstoppable Pederson rambled for 150 yards on 24 carries and a 19 yard scoring run in the Wildcats heartbreaking 27-24 loss to North Platte. How good is Pederson? 1,340 yards and 13 touchdowns good. This young man is one of the best running backs in Class A, period.

*Ethan Shaw, Josh Shaw, Micah Biltoft-Sandy Creek - FRESHMAN Ethan Shaw closed out the 2021 season by completing 15 of 22 passes for 173 yards and a 21 yard TD strike to Micah Biltoft in the Cougars 21-8 loss to highly ranked Class C-2 Hastings St. Cecilia. All-State senior brother Josh Shaw closed out a sparkling career with 200 tackles despite being double-teamed 95% of the time. Shaw also logged 29 tackles for losses and generally caused major heachaches for every offense he faced. On offense, Josh recorded a bushel basket full of pancakes, oftentimes just for the sake of playing the game the way it was supposed to be played.

Ethan Shaw, by the way, completed his rookie season by completing 60% of his 128 passes for 1,164 yards with 14 touchdowns. He also caught 3 passes for 88 yards and a TD and recorded 23 tackles on defense.

There is talk the Cougars will drop to the 8-Man ranks along with Sutton for the next 2-year cycle.

The 5-3 Sailors aren’t finished yet either, as they travel to Hi-Line Thursday in the opening round of the Class D-1 playoffs. Kickoff is slated for 6:30 as Sutherland hopes to reverse an earlier 44-24 loss to the Bulls.