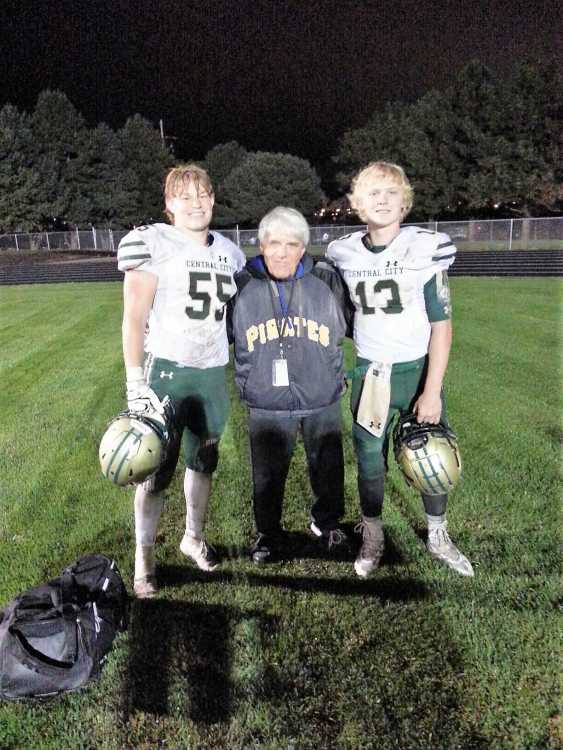 The 1-4 Central City football came to play football tonight. It took a while to overcome the wind, the driving rain and some lapses in judgement, but when the Bison started clicking, it was a “Katie bar the door” dominating 41-17 win over Grand Island Central Catholic.

Central City field general Michael Rutherford, who posted monster Dual Threat Quarterback statistics a year ago, (1,878 passing/708/rushing), was as good as advertised, if not better to see in a live setting.

The 5-10, 160 pound Rutherford was 13 of 22 passing for 109 yards and two touchdowns, rushed the ball 28 times for a season high 162 yards and and additional scores, plus posting several tackles on defense, along with intercepting a Russ Martinez pass.

All in all, a relatively “normal” night for the Michael Rutherford, who absorbed a boatload of crunching, gang tackles all night, yet bounced for more each and every time. And what about the 5-11, 200 pound linebacker that wears the number 55?

That would be one Nik Erickson, and I could tell in warmups that this dude was the real deal. Not a rocket science move on my part since I already knew Erickson had made 64 tackles coming into game 6 this season.

You combine that stat with the 93 tackles he made a year ago, and the 57 the guy had as a sophomore plus the nine he even posted as a freshman, you wonder why the man hasn’t be an all-state selection yet. Also take into consideration that 126 of Nik Erickson’s 293 career tackles (entering tonight) have been solo stops, so his performance tonight was no surprise whatsoever.

You also know the young man is special when the white hat, head official comes over to sideline and asks if you watched that #55 “making plays” all night.

Hey, I saw a double overtime game Thursday night in Fullerton and went in expecting the possibility of another tonight. The calpreps site even predicted a nail-biting 31-30 Central City victory.

Central Catholic looked pretty good early on. Meanwhile, Central City was having a few problems on the field making decisions whether to run the ball or throw it. Of course the answer was run the thing, considering the poor playing conditions due to a horribly stiff SSE wind and the driving rain that accompanied it.

The Crusaders drew first blood when Super-State kicker Dietrick Stolz booted a 36 yard, frozen rope field goal through the west uprights that were rocking back from the stiff East wind. Stolz FG kick just barely snaked its way through, but it still counts the same.

Now…..enter Central City’s special teams play. Precisely at the 9:42 mark of the second quarter, Bison junior Charles McGinnis shot through the Crusader 4th down punt formation defense to block the punt. McGinnis never hit the ground, followed his blocked punt into the endzone, but could not hold on to the slick, spinning football and let his momentum carry his body out of the that endzone for a safety.

Central City head coach Troy Huebert was not pleased with what he thought should have been a touchdown, but his disappointment turned to smiles later in the quarter when QB Michael Rutherford broke off tackle for a 62 yard touchdown run.

The smile widened even more when young Huebert’s team had an opportunity to score another touchdown before halftime.

The swarming Crusader defense, led by Marcus Lowey, Sam Herbek, Reid Martinez, Isaac Herbek and company, did manage to thwart the drive, but Central City place kicker Troy Ziska converted on a 33 yard field goal attempt 8.7 seconds before halftime to give the Bison an 11-3 baseball-like lead at the break.

I’m not sure what was said in the Central City locker room during halftime, but whatever it was worked like a charm, because the Bison defense came out with seemingly some more blitz packages, and Michael Rutheford kicked his offensive game into high gear.

But first, it was the Central City special teams getting in the act again. In fact, the Bison forced a GICC turnover on the kickoff to begin the 3rd quarter.

Michael Rutherford then came in and immediately fired an 18 yard touchdown strike to speedy Tanner Schneiderheinz. The same two teamed up for the double PAT, extending the Bison lead to 19-3, and the landslide was on.

Rutherford began piling up the rushing yards, Erickson, McGinnis and cohorts continued to cause major headaches for the Crusader offense, and before the third quarter was over, Rutherford would hook up with Charles McGinnis for an 8 yard touchdown pass.

The outstanding Central City quarterback added a 7 yard TD run with 6:44 left in the 4th quarter to make it a commanding 33-3 lead for the Bison.

First off, he hit cousin Reid Martinez with a 26 yard touchdown pass, the latter making a fine leaping catch for the score.

After hard running Bison runner Shad Quintanilla added a Central City score with a 3 yard run, Russ Martinez would connect with a streaking Tanner Turek for a 43 yard touchdown strike to close out the scoring.

Russ Martinez finished the night completing 11 of 25 passes for 191 yards yards, 2 touchdowns and an INT. Russ also led the Crusader ground attack with 78 yards on 22 totes.

Tanner Turek was the leading Central Catholic pass receiver with his single 43 yard TD catch. Reid Martinez caught a pair of passes for 41 yards and that 26 yard touchdown reception, while Zach Cloud also had 2 catches for 35 yards.

Central City, now 2-4 travels to Fairbury next Friday, while GICC (3-3) will make the 15 mile trip west to play Wood River. Both are C-2, District Six matchups.

CC - Safety (Charles McGinnis recovers ball in back of endzone)