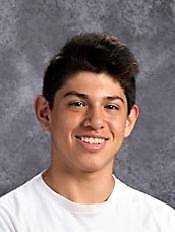 Quade has broken out with his running game the past three outings with games of 191 yards against Kimball, 201 more versus Alma, then the 246 yards in the win over Arapahoe.

This Dundy County/Stratton squad, which includes only 2 seniors, is an extremely dangerous football team despite all the youngsters. The Tigers only loss this season was to Class 8-Man One’s 9th rated Wauneta-Palisade team.

The Tigers have games remaining with a pair of teams that are currently 2-3, Hitchcock County and Cambridge, before closing out the regular season with Southwest, currently 1-4.

*Jared Minnick - West Point Guardian Angels Central Catholic - All it took was 3 carries against Omaha Nation to get Jared Minnick over the 1000 yard rushing mark for the 3rd straight season. Jared carried the ball 3 times, scored 3 touchdowns, and gained 106 yards in GACC’s 60-12 win over the Chiefs. That gives the superb senior 1,021 yards for the season and 4,089 yards in his 33 game career with 65 TDs.

That also is the 12th consecutive game Jared Minnick has rushed for over 100 yards. The 190 pound senior has also logged 150 tackles in his career, with 93 of those being solo stops. The dude is just a vintage Coach Dave Ridder, tough-as-nails Guardian Angels CC football player. You play hard, you play tough, or you don’t play at all for Ridder’s football teams.

*Karson Gansebom - Bennington - 6-2, 175 pound senior was lethal when he touched the football in the Badgers 48-12 win over South Sioux City. Gansebom rushed one time in the game, that one going for a 33 yard touchdown. He also caught 3 passes from Nick Bohn for 156 yards, two of those going for touchdowns that covered 26 and 87 yards. Karson also booted 6 of 7 PATs.

*Wyatt Ehlers, Caleb Horne, Max Tomes, Bronco “D” - Centennial - If you are North Bend and playing Centennial, what do you prepare for? Well, since Centennial has an all-state QB in Wyatt Ehlers, an all-state receiver in Jackson Hirschfeld, and Centennial throws the football 65% of the time, it’s pretty obvious you ready your defense for an aerial circus. Not last Friday.

Centennial rushed for twice as many yards as Ehlers compiled passing, and proceeded to beat up on North Bend, 47-14. By the time the chubby lady sang, Caleb Horne had rushed for 78 yards on 12 carries and 3 TDs (2, 20, 6 yards), Ian Schlueter gained 100 yards on 21 totes, and Wyatt Ehlers rushed 5 times for 24 and a pair of one yard touchdown runs.

Max Tomes also returned two kickoffs in the game, one spanning 49 yards, the other a killer 85 yard touchdown return. Jackson Hirschfeld did not catch a touchdown pass, but still caught 8 Ehlers passes for 84 yards. And how about that Bronco defense?

The Bronco “D” was just as mean against the run, stuffing North Bend to 67 yards on 25 tries and 3 lost fumbles for the game. So…..the Centennial air raid defenders that picked off the Endorf passes were Wyatt Ehlers, Jackson Hirschfeld and Kalten Bauers, while freshman Michael Nisley, along with seniors Cole Gacke and Caleb Cast each recovered fumbles.

*Dylan Kautz - Norfolk Catholic - Ripped off 270 yards rushing and touchdown runs of 4, 10 and 36 yards in Catholic’s 54-20 win over old rival Hartington Cedar Catholic. Kautz also caught a 7 yard TD pass from Cayden Cunningham in the third quarter. Knights place kicker Riley Carlson booted field goals of 40 and 24 yards in the win too, which may come in handy come playoff time.

Dylan Kautz, the 4 year thousand yard rusher, now has 1,346 yards through 6 games this season, while compiling a massive 6,185 career rushing yards, which places him 12th on the all-time Career rushing chart in Nebraska high school football.

Joseph was just plain scary in a 50-7 win over Crete, completing 16 of 18 throws for 326 yards and 3 TDs. Junior RB Gabe Knisley was lethal against the Cardinals, catching two of Joseph’s touchdown passes covering 22 and 73 yards. Knisley also rushed the ball 9 times for 121 yards and a 5 yard touchdown run. Brett Meyer had the other TD reception, a 21 yard strike.

Joseph Krause this season….101 of 156 passing for 1,785 yards, 21 touchdowns and NO interceptions. This dude is going to have over 6,000 career passing yards before he calls it a career. Incredible. I like this young man!

1000 yard rusher Adam Cooper ran for 90 yards on 16 carries and a one yard TD plunge, and reserve QB Alex Brandt also fired a 17 yard TD pass to Cayden Benson with 1:39 left in the game.

Carter Terry now has 1,332 yards passing (61% completion rate) and 15 TDs for the season. Adam Cooper, who is being targeted more by defenses this season, is at 542 yards rushing after 6 games.

*Brett Simonsen, Jackson Perrien, Mustangs “D” - Sutton - The first thing you need to know is that this Sutton defense travelled to Kearney Catholic, shutout the Stars for the first time in 15 years, and limited them to 135 total yards for the night. That’s a difficult task to pull off.

Tough Seth George had a pair of QB sacks. Kinser Rafert and sophomore Cade Wiseman both recorded interceptions in the game.

Brett Simonsen is at 855 yards rushing for the season. Jackson Perrien currently has 694 for Class C-2’s 3d ranked Mustangs

*Riley Kopf - Lexington - 6-0, 180 pound senior running back literally exploded in Lexington’s 42-7 win over Gering. Kopf ran the ball 22 times for 173 yards and a pair of touchdowns. He also caught a 6 yard scoring pass from QB Jake Leger. Caleb Carpenter also had a pair of interceptions in the win for the 2-4 Minutemen.

*Logan Wiedel - Thayer Central - Threw for 218 yards and 4 touchdowns in the Titans 36-31 win over Southern. Three of Wiedel’s scoring tosses were caught by Jarod Hergott