We lost a Coaching Icon Saturday. 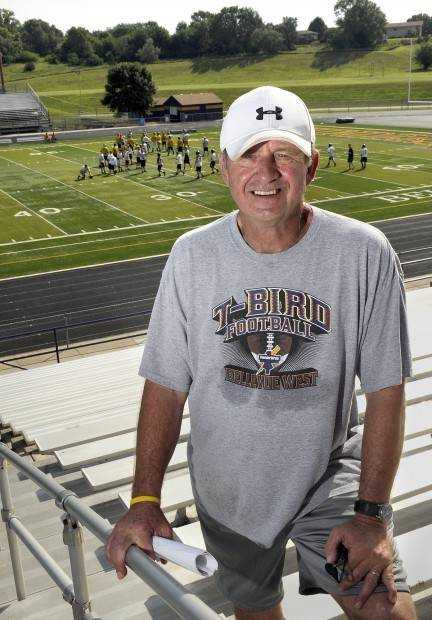 John Faiman was not only a fine coach but was an outstanding athlete. He was an all-state quarterback at Omaha South in 1958 and played in the very first Shrine Bowl football game in 1959. He was equally talented on the baseball diamond. He threw two touchdown passes for Nebraska in Bob Devaney's first game as head coach. An injury cut his football career short, but he went on to play baseball for the Huskers.

John Faiman was an offensive mastermind.......not only at the high school level, but far beyond that. After coaching stints at David City, McCook and Omaha South, Faiman teamed up with ex Husker assistant Warren Powers at Washington State as his offensive coordinator and promptly came back to Nebraska and helped beat the Cornhuskers 19-10. But it was a year later when John Faiman was 37 years old that may have defined him with the offensive genius tag that stuck with him for the rest of his days. After that 1977 season at Washington State, Warren Powers was hired as the head coach at Missouri.......Faiman followed Powers to Mizzou. On a cold, raw, blustery day at Memorial Stadium in Lincoln Nebraska, Powers, Faiman and the Tigers came into town and shocked the #2 Cornhuskers 35-31 and knocked Nebraska out of a possible National Championship paring with Penn State. Faiman turned RB James Wilder lose to the tune of 181 yards rushing and unleashed a guy by the name of Kellen Winslow, who caught 9 passes for 132 damaging yards. Not only did that loss deny Nebraska a National Championship opportunity, but it thrust them into a rematch in the Orange Bowl against league rival Oklahoma, a team they had beaten the week before the Missouri game. I wonder how long it took Tom Osborne to get over that one?

Faiman stayed at Missouri for 5 seasons, went to Utah, then Kansas State and finally became tired of his head coaches being fired and returned to Bellevue West in 1985 where he served as head coach until Saturday, June 16, 2012.

I spoke with Coach Faiman many times when attending games in Omaha. He was old school all the way, tough as they come. Makes me wonder if there will ever be men like him years from now. Coaches like Jerry Ball, Tom Jaworski, Skip Palrang, Dennis Hurlburt, Vince Aldrich, Jerry Lee, Ed Haffner, Roger Higgens, Don Leahy, Ken Cook, and so many more left their mark on high school football. Some of those greats are gone, but luckily some of those shining stars are still among us, but are there offshoots in the coaching ranks today that mirror their images?

Why do I think that John Faiman would rather have passed on instead of facing retirement from coaching high school football? Not so very long ago he told Stu Pospisil of the World-Herald that he hoped he could coach 'till he was 80. The eerie question that faces people who passionately love high school football is this......who replaces an icon like John Faiman? In the case of Jerry Ball, it was his talented son, Jay Ball who is currently head man at Omaha Central. Will there be "old school tough" men like Faiman? Will there be men so dedicated to the game that nothing will stop them from driving forward but death itself? Do these kind of coaches exist today? Yes, the game has changed and so have the athletes, but the iron men of years past may be headed for extinction. That old saying "they don't make 'em like they used to" might apply here. Let's hope not.

John Faiman will be missed by his peers. That's an understatement, for he touched so many lives. I am just a mere sidelines roamer, but I learned a ton from this man just from being around him the precious little time I spent with him. One bright ray of hope though. I never, ever heard coach Faiman say anything negative about "the young guys coaching today". Others may have, but not I. He had faith in the game, it's changes and it's future. You do not replace a man like John Faiman.....not possible and that's the sad thing, but we can all rejoice in the fact that he was with us for 71 seasons and taught us how to play the game, love it and keep the sanctity of the game of high school football alive.

We have all learned from you Coach Faiman......some of us the hard way such as those who played for Nebraska on that cold, blustery day in Lincoln on November 18, 1978. Win or lose though, the game of Nebraska High School football is in better shape today because of Coach Faiman's contributions and lessons. He will be sorely missed for certain.

I hear there's a coaching vacancy up there my friend but I think you probably have already found it.