Living Righteously Through The NFL 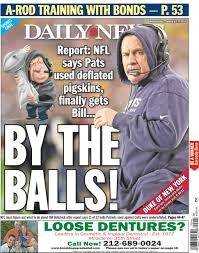 I guess I am beginning to understand how today's American citizen thinks. The American psyche has gotten weird,

I now know that the American people will not put up with an NFL Quarterback or Coach deflating footballs for a game. That kind of skullduggery will not be tolerated by Mr. and Mrs. citizen.

However, having a President who lies repeatedly about almost everything is perfectly fine.

Adrian Peterson gets rough with his son, and the fans demand justice, not now, but yesterday. And that justice had better be swift, and harsh, or else.

However, having an administration that sold guns to drug lords and criminals in Mexico that resulted in the murder of hundreds of Mexican citizens, including women and children, and a United States Border Patrol Agent, gets a big yawn.

Ray Rice knocks his wife out in an elevator, and boy do the fans speak out. "Take away his career" they cry, "punish him, punish him", we need PSA's and a special campaign to make the horror go away.

However, when the President deserts his ambassador in Benghazi, doing nothing to help while the diplomat is brutally raped, tortured and murdered by terrorists, that behavior does not bother the Obama voter.

Obama, Hillary, and a parade of Democrats, conspired to feed the American people a bunch of bullcrap, with a completely made up story, to cover the administration's illegal gun running, and incompetence. And that is met with apathy and charges of racism.

Why is it the men who play Professional sports must tow the line, while elected Democrat politicians can break law after law with impunity?

I listened to some national sports guy on the radio today, (a typical northeastern Liberal) go absolutely nuts. "What did Belichick know?! When did he know it?! Brady knew! Brady knew! How could he not know?"

He kept crying about the "integrity of the game."

But the integrity of our Constitution, our Judicial System, and our government is not so important?

So let us all live righteously through the NFL.

We haven't even talked about the scores of crimes and thousands of lies told, in the Conspiracy to rob us of truly affordable health care.

Liberal eggheads have even bragged how they lied to us because we are "too stupid" to know what we need, or even want.

Lets focus on the NFL.

As our society and country decline, we can make damn sure the NFL is righteous. No tolerance.

Tom Brady may have deflated footballs.

Obama has defiantly danced on The Constitution, and rubbed it in our faces.

So, Tom Brady must pay for his 'crimes' and Obama is excused.