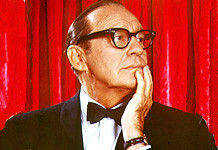 February 14th approaches. It is a special day for me. Yes indeed, February 14th is Jack Benny's birthday. If memory serves me right, Jack will be 39. Jack has been 39 since 1933, when he actually turned 39. And it is not just Jack Benny that I fondly celebrate on February 14th, but the golden age of radio as well.

Thankful I am to satellite radio, as the past few years have given me the opportunity to enjoy classic radio programs, but Jack Benny is my favorite.

Jack was amazing, he really was. He made America laugh out loud for decades, never uttered a curse word to get laugh, and usually the only person who got insulted on the his program was Jack Benny. Everyone got laughs at Jack's expense, and that was fine with him, just as long as folks did laugh, and they did for over 25 years on radio and a dozen years on television.

Some of Jack's best programing, the real classics, the ones that you laugh so hard at that your sides ache, came during the WW2 years. But all of radio stepped up during that time. The country appeared to be together, with a common goal, placing the country above politics, which was reflected in the programing of the day.

One of the best gems of listening to Jacy Benny shows, (or you can buy episodes of the television show on DVD) was getting to listen to voice whiz Mel Blanc. Blanc was fabulous on Benny's show. Long before Bugs Bunny, Daffy Duck, Sylvester or Speedy, Mel Blanc was at least two dozen different characters on the Jack Benny Show. Along with George Burns, Mel Blanc was Jack's best friend too. Jack's daughter recently said in an interview, that she would bug Mel Blanc to do all his cartoon characters constantly. Mel claims he was practicing.

So many shows are worth listening to, if for nothing else but sheer enjoyment, that I'd like to plug a few. Fibber McGee and Molly is a wonderful show that blessed folks every week for over twenty years. Talent abounded on that show with another voice whiz, Bill Thompson, and the Great Gildersleeve, Harold Peary. Peary went on to do the first family sit-com spin off on radio, The Great Gildersleeve. And we cannot forgot Gale Gordon, an extremely talented guy who appeared on dozens of programs. Gordon did make on television, often with Lucille Ball.

Comedies were abundant, with Bob Hope, Lucille Ball, Milton Berle, Jusy Canova, Red Skelton, Alan Young, and Fred Allen. All of these folks followed Jack's lead, never getting dirty, never getting mean, never getting political, and engaging the public in the humorous side of life.

Classic radio also has some great Westerns. No shock there, right? You know that a redneck conservative is going to like westerns. And there were some good ones, my favorite: Gunsmoke. If the comedies did not take on any real issues, Gunsmoke did. This show was more than a Western. Oh it was a Western alright, but they were excellent dramas as well. I've heard shows that took on prejudice, hatred, wife-beating, law and order, and matters of conscience and morality.

William Conrad played Matt Dillion, and he was super. The television folks thought Conrad too fat and too short to play Dillion on televison. Other radio Gunsmoke cast members did end up on television. Parley Baer as Chester and Howard McNear as Doc, both ended up on TV, but on the Andy Griffith Show, with Baer as the Mayor of Mayberry, and McNear as Floyd the Barber.

Other Westerns of note were, Tales of the Texas Rangers with Joel McCrae; Frontier Gentleman with John Dehner, and Fort Lamarie with Raymond Burr. John Dehner was another of those magical guys in radio, with a marvelous baritone voice, he was a mainstay of radio Westerns and dramas. Raymond Burr went on to do Perry Mason and Ironsides on TV, as well as a bunch of Godzilla movies, my favorites with Mr. Burr.

If you have satellite radio, try and give a listen to the the Radio Classics channel for a change of pace. There is an amazing variety of classic radio programs.

And I haven't even had time to mention all of the Detective shows on classic radio, or the mysteries, or plays or musicals. Last week I listened to a program that had Bob Hope, Frank Sinatra, Jimmy Durante, Judy Garland, Dinah Shore and Bing Crosby. Quite a line up, a musical comedy called Dick Tracy in B Flat.

So HAPPY BIRTHDAY Jack Benny. Thanks for everything. I appreciate what you and your family in radio did during some harsh years. I know you are one of the guys who can make God laugh.