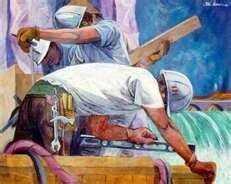 I met "The Boss" earlier this year. He was recruiting hired hands for a special project and he was just loaded with promises. He basically promised hard work, long hours, tough conditions, being away from home, little or no time off, few breaks and good pay.

Sounds just too good to pass up, doesn't it? So, I packed and kissed my wife good by, and off I go. The four month long employment opportunity was a rather large one, involving scores of skilled and semi-skilled workers, recruited from around the country. The Boss provided modest, but comfortable, accommodations for housing. In my bunkhouse, there were five of us. Men from Rapid City, Denver, Omaha, Idaho and yours truly.

In a short ten days time, I am the only one left in my bunkhouse. The quitters had whined about the hours. And they whined about the pay, or conditions, or being away from home - all of the things The Boss had promised.

About 10% of the folks hired flaked out in the first few days. I asked The Boss about it, and he said that he had no choice but to bring in "the Southern boys".

Two days later, I awoke to fine that four men from the Durango Mexico area, had moved in to the bunkhouse. The Boss asked me to "look after them." I was now officially a Den Mother in the Twilight Zone.

Actually, it has been a most interesting experience. These four, Miguel, Jose, Jorge, and Fransisco, are all skilled, and all in their forties. Only Miguel speaks a tiny bit of English, the other three do not.

I honestly do not know their immigration status, I haven't asked, I don't want to know. Don't look at me that way. What I am suppose to do about the flood of illegals? They have invaded this nation in steady streams since Ronald Reagan was in office. You think kickin' Miguel in the knee will help?

Miguel told me that he is here working for college money for his daughter. He took a three hour plane ride to El Paso, then a bus for the remaining 700 miles. He is ready to work. He doesn't care if the bed isn't right, he doesn't care if the hours get long, he'll work all day long with hardly a break - he just works and smiles, and cooks lousy Mexican food when the day is done.

None of these guys can cook. They cook all the time when they are not working. Maybe the food is great, and I am too much of a hillbilly to know it. Maybe I have eaten at Taco Bell too many times. All in all, they seem to be very happy with the opportunity The Boss gave them.

Am I upset that Miguel is up here from Mexico, doing a job that a citizen was hired to do, but refused to do? No, rather I admire Miguel, for his courage, and for his efforts; sacrificing for the chance at a better life for his daughter.

As for me, I will try and represent the United States the best way I can. When they do get to return home to their wives and children, I want them to say nice things about the "hombre alto" they lived and worked with daily for four months. The steady effort they put out is hard to keep up with, but it challenges me to be my best.

There is so much that could be said here. I could rail against the lack of work ethic and lack of courage in many Americans today. Is it not a shame that folks like The Boss must go to Mexico to get the help he should be able to get in the USA? After all, I thought millions of folks were looking for work.

We could talk about the immigration problem, which should be defined as an massive infiltration or invasion. You don't even have to travel much to see that illegals have invaded our country. One out of every three school children in Texas is an illegal, and our politicians have done nothing to stop it.

I have often called for some serious new thinking on our relationship with Mexico. You are kidding yourself if you think we are ever going to build a fence. And is that really a smart thing to do anyway? Today, perhaps as many Mexicans reside in the USA, as in Mexico.

Democrats are stuck on the race thing. They call many people racists, when they are the ones engaging in racist behavior. Republicans just don't want to offend anyone, especially with today's' vermin of a media, representing and speaking for the chronically offended.

Republicans are fooling themselves if they dare to join the Democrats in some type of welfare give-away contest to see who can gather the illegal immigrant vote.

As for my new found friends, well...I wanted a little adventure, and I got one. I am anxious to get to know these guys, and try and gain an insider advantage to find out about conditions in Mexico for families.

I'll let you know how it goes. Adios! Ahora, vamos a ir a trabajar!

More from this blogger · Sam Eldridge
Comments
View 48 comments
Note: The nature of the Internet makes it impractical for our staff to review every comment. Please note that those who post comments on this website may do so using a screen name, which may or may not reflect a website user's actual name. Readers should be careful not to assign comments to real people who may have names similar to screen names. Refrain from obscenity in your comments, and to keep discussions civil, don't say anything in a way your grandmother would be ashamed to read.
Respond to this blog