My Trip To the Dark Side 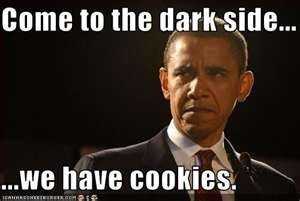 The decision to journey to The Dark Side came earlier this year when I had finally had enough of gangster government. I had never been a fan of "if you can't beat 'em, join 'em", however, when some government bureau-weenie decided to steal a days wages from me on a technicality that would cost me thousands to fight, I decided to end my self employment, and made conscience effort to go to The Dark Side.

Yessiree, It was time to go to work for the government.

In the real world, a self employed truck driver must work 12-14 hour workdays. Not so on The Dark Side. My workday was 5-6 hours, and yet, I was paid wages as if I had actaully worked 12-14 hours.

Something happens to a person when they enter the world of The Dark Side. I am a bit embarrassed to admit that it happened to me. There is a certain buzz that a person gets when they realize they are earning high wages for very little work. It is intoxicating, although...I can not pretend to understand the intoxication.

I suspect there comes a point in which a person's conscience will either convict them, or they will choose to bury their conscience forever.

That point came for me on Memorial Day. I had friends, still slugging through the daily grind of the self-employed, trying to please an evil and manipulative government at several levels. On this past Memorial Day, yours truly was paid about $50 an hour to haul an empty mail trailer from North Platte to Denver.

Haven't we all heard that the Post Office is on the verge of Bankruptcy? In the real world, a self employed truck driver knows that paying someone double wages to haul empty trailers will lead to disaster.

Ah...but in The Dark Side, you learn justification.

"No one will ever know."

"If you don't do it, someone else will."

"There is so much waste, what does this little bit matter?"

"Everybody else working for the government has no problem with high wages for little work, why should you rock the boat?"

Well, being the big mouth that I am, I asked questions, like "Why are we hauling empty trailers?"

"Why are we working about half the hours that our private sector counterparts work?"

"Why two trucks when one will do?"

Good Lord, you would have thought that I had slapped the Pope the way The Dark Side management types responded to my questions. "Are you trying to start trouble?"

The most important thing a 'dark-sider' works on is keeping the job for which they are overpaid and under worked.

Now please, you folks that live on The Dark Side, do not get mad at me for telling the truth. Even 'dark-siders' know that a ditch digger in the private sector will work harder and longer for less wages than a ditch digger working for The Dark Side.

The other thing 'dark-siders' must do is to avoid any political talk at any time, UNLESS IT IS PRAISE. Under no circumstances are you ever to criticize the thug President.

It was funny to watch, whenever you'd ask a 'dark-sider' a direct question about politics, the prez, or the job, they'd look around to make sure no-one else was listening before they'd answer. Sick stuff really.

By the time the 4th of July came around, I got to celebrate the 4th by hauling yet another empty trailer to the Post Office in Denver for fat wages. Holidays were not the only time I hauled empty trailers, they were just the times in which I was paid double wages to do it.

I decided I had enjoyed enough time as a 'dark-sider', and when I gave my notice, and explained that I was returning to my own truck to try and be a productive member of society again, the folks on The Dark Side were shocked.

No one quits The Dark Side! Are you crazy?!!

It is difficult, as you might imagine, to leave a gravy job. There were many folks eager to jump into The Dark Side. My replacement acted like he had won the lottery. He could hardly contain his glee and excitement. 5-6 hour work days...wow!

There are some of you, no doubt, that think I was an idiot to leave a high paying job, in which I had to do very little real work. Maybe I am, but there comes a point in which we all must live with ourselves.

Those of us who fight the good fight of self-employment, the hardware store owner, the mechanic, the farmer, the truck driver, we understand the government hates us. They want everyone on The Dark Side. We fight the good fight even though 'dark-siders' will do everything in its power to ruin us, to break us.

If any of you doubt me, take one day, go to North Platte, to the Port of Entry there, and watch. Watch the 'dark-siders' and the union trucks cruise through the Port with no harassment and then see the seething hatred and rage against the self employed drivers when they roll through.

I know there will be times when I wonder if I did the right thing. Principles come with a cost, don't they?

Even if I go broke, and considering the ugly nastiness of today's government at the State and Federal levels, going broke is a real possibility, I am glad that I said "No!" to the Dark Side.

Tomorrow, as I prepare to jump in my 12 year old truck (dark-siders get newer trucks) I will at least have the satisfaction of knowing that I wandered into the world of The Dark Side and managed to escape.

More from this blogger · Sam Eldridge
Comments
View 12 comments
Note: The nature of the Internet makes it impractical for our staff to review every comment. Please note that those who post comments on this website may do so using a screen name, which may or may not reflect a website user's actual name. Readers should be careful not to assign comments to real people who may have names similar to screen names. Refrain from obscenity in your comments, and to keep discussions civil, don't say anything in a way your grandmother would be ashamed to read.
Respond to this blog