A Stadium Full Of Obamanomics 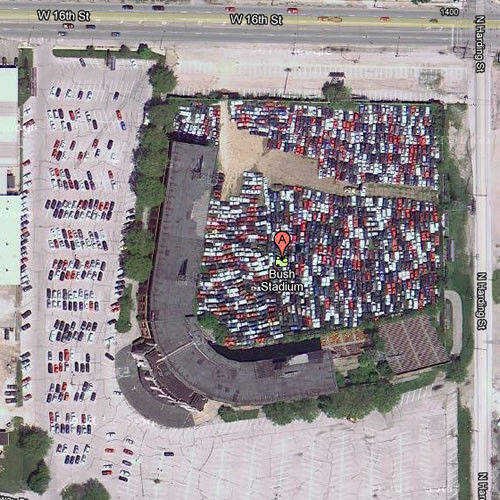 In an excellent article in Pajama Media, Bryan Preston gives us truthfull in-sight into the incredible incompetence of this gangster administration of B. Hussein Obama.

"This week, President Obama nominated Princeton economist Alan Krueger to replace Austan Goolsbee as his chairman of the president's council of Economic Advisers."

(Freddy Krueger would have been a better choice)

"Prior to his nomination, Krueger's chief public policy claim to fame was the Obama administration's "Cash for Clunkers." That program put the already cash strapped US government on the hook for buying thousands of cars off the hands of Americans, as trade-ins for the newer cars. The program was supposed to jump start the US auto industry and stimulate the economy.

It didn't. And what happened to all those cars the government bought?"

(If you get your news from the Obama propaganda media, you'll never get an honest answer to that question)

"...according to Google Maps, they are rotting away in historic Bush Stadium in Indianapolis, IN. The historic stadium has been a Negro league stadium, a minor league stadium, and a race track during its lifetime. Placed on the national register of Historic Places a while back to ensure its survival, the stadium has fallen into disuse."

"The government bought cars, had no place to put them and no system in place to part them out, sell them, destroy them, or otherwise get rid of them.

So the Obama administration rented out Bush Stadium and filled it up with cars. Hundreds of objects, all containing parts that could be used in cars still on the road, recycled, sold, etc., just sitting there rotting away."

(where did Obama get the money to rent a stadium? From your grandkids)

"But the government had a dual agenda in C4C: Stimulate the economy and get lower mileage cars off the road while replacing them with newer, high mileage cars. with that second part of its agenda in place, it couldn't very well sell the cars despite the value that many of them held at the time of the sale."

Here is the link if you'd like to read the article.

Government waste and incompetence on full display, hidden away from investigation or scrutiny by the worshipping lapdog Obama mania media.

Many of these cars were operating just fine when turned into cash trade-ins by a clueless administration. So what did the government thugs do to these cars? If the engines were working, government thugs destroyed the engines by putting sodium silicate in them. So now we have a possible environmental disaster in the form of thousands of cars, once in working order, destroyed by a nutty and evil government with harsh chemicals, a mere 500 feet from a major river!

It has been a few months since I was in Indianapolis, but I think the White River runs right by this stadium. Where is the EPA? (the EPA is busy planning fines and jail time for upcoming light bulb violations)

The government, this administration and today's Democrat Party, are really nothing more than criminal organizations. John Gotti, Al Capone, The Godfather - peanuts compared with the mob running the Democrats and the Obama administration today.

So as Obama plans to use the 20-40 million illegals infesting our country to get himself re-elected, remember that this group has no soul, they have no conscience. They are Amoral, would lie to their own granny, and would take your kids' last nickel in a heartbeat to stay in power.

Your children will have to pay for all those cars, wasting away in Bush stadium. They will have to pay now to have them destroyed, because of yet another nutty liberal idea. You would think people will learn.

Unfortunately, so many Americans nowadays are willing accomplices to Obama's insanity and hatred of America.

More from this blogger · Sam Eldridge
Comments
View 13 comments
Note: The nature of the Internet makes it impractical for our staff to review every comment. Please note that those who post comments on this website may do so using a screen name, which may or may not reflect a website user's actual name. Readers should be careful not to assign comments to real people who may have names similar to screen names. Refrain from obscenity in your comments, and to keep discussions civil, don't say anything in a way your grandmother would be ashamed to read.
Respond to this blog