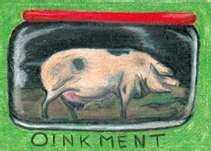 Many tried to point out Obama's miserable failure of leadership during the BP oil spill. Barack was simply too busy partying, vacationing and playing golf to actually lead, besides, BP and the Obama administration had been all buddy-buddy until the spill.

At the time the BP oil spill happened, all Obama and his pals in the media could do was try and make political hay of the situation. Since Obama has no real leadership abilities, or management experience, what has gone on in the Gulf since the BP spill has been gross mismanagement, nepotism and greed gone to seed.

A very eye-opening report from ProPublica and the Washington Post, as well as the UK Guardian, shows what happens when you have a gross dereliction of duty at the Presidential level.

To quote the report, we now have "The Spillionaires".

The article is long, and the facts are many, so I will just try and give you some highlights.

Before I do, I should point out that nature took care of the majority of the spill, just like Rush Limbaugh, other Conservatives, and real scientists (not on the government dole) said it would. The hysteria by Democrats was for political gains, and to help destroy our energy production, which has always been a big goal of the left in America.

Because of the mismanagement by Obama and his cronies, locals were interviewed and records examined for a suburb of New Orleans, the greedy little hamlet of St. Bernard Parish. Documents showed that companies with insider ties to the Parish, got lucrative contracts after Obama's shakedown of BP. Remember, BP contributed vast sums of money to Obama.

Most bills were submitted with little or no documentation. One subcontractor billed BP $15,400 per month to rent a generator which usually costs $1,500 per month. Just the tip of the iceberg.

Another company, in which the powerful Sheriff of St. Bernard Parrish has a financial intrest, charged BP more than $1 million a month for land it had been renting for less than $1,600 a month. Way to go Sheriff!

"Because the federal government ceded control over spill cleanup spending to BP, it's impossible to know for certain what that money accomplished, or exactly what was done," the report found.

They stick their damn noses into everything they should leave alone and then when something comes up the feds should oversee...they punt, or as Obama has done many times, they vote "present".

"This Parrish raped BP," said Wayne Landry, the chairman of the St. Bernard Parish Council, who expressed frustration with all the shenanigans.

"...Sales tax receipts, a key measure of economic activity, rose significantly in ... communities from Louisiana to Florida. A recent story by the Associated press found that governments along the coast used BP money to buy SUVs, Tasers, and other equipment not necessary to clean up oil."

That doesn't really shock me, does it you? If you are driving down Interstate 80 and you see a brand new shinny dump truck, you know right away that dump truck is a government vehicle. The taxpayer farmer paying the bills, usually buys a used dump.

Back to the oinkers at St. Bernard Parrish. They collected almost $26.8 million in sales and lodging taxes receipts in the six month period after the spill, twice as much as over the same period a year earlier.

"Flush with cash from cleanup and claims, many fishermen bought new toys, boats and trucks. Sales at the nearest Chevrolet dealer rose 41%."

Allot of money went for overtime for chosen employees of the Parish. Forty government employees earned staggering amounts of overtime, including three employees who claimed overtime to buy dog food. One employee claimed 497 hours of overtime in less than 7 weeks! Nice work if you can get it.

"Felesia Carter, a manager at St. Bernard's only off track betting parlor, said customers were gambling away claims money. Her business was so good, she said, that employees worked overtime."

Much of the problem in St. Bernard's parish was due to the heavy handed dealings of parish President, Craig Taffaro, Jr.

"He invoked a Louisiana law that allowed him to declare a 30-day emergency and handle the crisis without normal checks and balances."

Taffaro chose a contractor, a pal of his with no oil clean up experience, and debt problems galore, to supervise the cleanup. Taffaro and his buddies decided who would get what, when they would get it, and how much. At one point, Taffaro hired his future son-in law, to work in the finance part of the operations, at a nice fat wage of course.

Oh there is so much more.

Off duty Sheriff's Deputies were paid $45 per hour to provide security. Oh, I know, they were just trying to help out. Nice to get $45 bucks an hour stuffed into your pockets when helping out huh?

There are many reports that you can read, with lists of abuses that will take you hours to read. The point is, no one knows exactly where all the billions that BP spent for clean up, actually went.

Some went for clean up, but lots of cash went for gambling, hookers, cars, boats, trucks, minks, fancy clothes, new houses, vacations, jewelry, tattoos, or was just plain stolen by local politicians and their buddies.

That is the price of government and Presidential mismanagement and stupidity.

That is the interesting thing about Louisiana. The state is rich in resources, timber, oil, shipping, gambling, tourism, etc., but much of their money is spent in the Democrat welfare machine and political corruption. The locals say, they just wait for the next hurricane or natural disaster to come around to get the rest of the county to rebuild their homes, improve their highways, or maintain their infrastructure. It is hard to get mad at them, when we let it happen.

The facts show that, prior to hurricane Katrina, millions upon millions of federal taxpayer dollars were allocated to rebuild and improve levies in the New Orleans area, but the Democrats in control at the time, spent the money elsewhere, welfare, political corruption, etc.

I don't see Louisiana coming up here to our part of the world to help us out with blizzards, droughts, high winds or whatever. They chose to live in Louisiana, so take the good with the bad. They seem to take the good, and waste it on government and welfare, then demand that the rest of us subsidize the bad.

Natural disasters can turn into a nice slice of pie for folks when the government can not or will not do its job. Or when politicians are too busy taking over car companies, and bribing unions, to do the job they are suppose to do.

However, in the end, Obama's gross lack of intellegence and hatred of American industry, may end up crushing those that were so greedy to get BP money. You see, Dear Leader Obama is destroying the oil business in Louisiana, and in the end, the money they looted from BP may be their last hurrah.

Never underestimate the power of a Democrat politician to do the wrong thing, at the wrong time, for the wrong reason, and with the wrong people, and then lie about it. That is what they do.

As Conservative genius Van Helsing at Moonbattery says, "every time our looter government steals a nickel, it spends a dime, then demands more."

Are you ready for tax increases? Better get ready.

Special thanks to Moonbattery for daily bringing the truth to light.