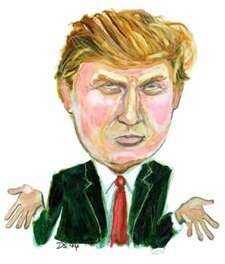 It so much fun to watch Donald Trump spank the Obama mania media. The propaganda media has been in a frenzy ever since "The Donald" has decided to take on Obama, America's first anti-American President.

First off, you must realize that Donald Trump does not give a rip about trying to please the media. He could care less what the Obama worshippers at NBC, CBS, ABC, CNN or MSLSD think.

My neighbor asked me last week what I thought about Trump for President. We enjoy our political discussions, sometimes they get lively. Before I would answer him, I asked my friend a question in return.

"If you were given an opportunity today, to replace Obama with Trump, would you do it?"

"In a freakin' heartbeat!" Was the immediate reply.

Indeed! I don't know that Donald Trump is a conservative. I know that there have been allot of Republican politicians that claim they are Conservatives until they get to Washington, and then they sell us down the river.

George W. Bush said he was a Conservative, and when he got to Washington, Bush decided to let the uber-Socialist, Ted Kennedy, write the education bill, and then Bush worked to install yet another entitlement around the necks of the American taxpayers. Bush, at best, was a moderate.

The thing about Trump, is that he doesn't claim to be anything other than REAL.

Trump is a businessman, a real businessman. He did not learn business in the Marxists classrooms of Harvard. He has real hands on experience.

That fact alone explains why the Obama media and the Obama attack hounds have come out after Trump. Democrat politicians can not help but tell you who they are afraid of.

Right after Sarah Palin was chosen to run with McCain, the Democrats launched their smear and destroy mission against her. They lied, they bribed, they attacked, they made up stories, they mocked, whatever it took to stop Palin.

Why? Because loony Democrats can not afford to have the average female in America realize that she can be successful without their help. No need to hate men. No need to abort kids to have a career. No need for indoctrination at some Liberal hell-hole of a college to get ahead. Sarah Palin had to be stopped, truth be damned, she had to be discredited.

That brings us to the whole "birther" thing. Trump is having a blast rubbing the lapdog media noses in the steaming pile that is Obama, and his past, or his lack of a past.

Remember when Tiger Woods was having problems? Within a week of Tiger running his Cadillac into a tree, the media found every single gal that Tiger had ever slept with.

All of them, their names, their addresses, their bra sizes, etc., we knew it all baby. Then the press uncovered photos, text messages, recorded phone calls, the list was never ending. The media knew exactly which golf club Tiger's wife had used to smash out windows in the Escalade.

And each and every single day, the media was able to give us updates on Tiger's sex rehab, his wife's plans for divorce, and all the financial info on Tiger you'll ever need.

YET: This same media cannot find jack do-do about their messiah, Barry Obama.

*They have been unable to find any of Obama's childhood friends or neighbors.

"The media can not find any of Obama's high school or college classmates.

*The media cannot find any of Obama's college papers or grades, nor has the media found out how Obama paid for both a Columbia & Harvard educations.

*The media has not been able to uncover which country issued Obama a travel VISA to Pakistan in the 1980's, or even find Michelle Obama's Princeton thesis on racism.

I have been concerned that Obama and his fellow Socialists would use the birth certificate issue the way the Clintons' used Monica Lewinsky.

Let's be real here. Considering how evil and corrupt today's Democrat Party has become, they can produce a birth certificate, even if it is a phony.

Forget about the birth certificate, it is a moot point now. In fact, considering leftward bent of Obama's core supporters, they would probably like him more if he was born in Kenya. If the focus is Obama's place of birth, Obama's real crimes against America, may go unpunished.

We do not need to repeat what happened with the Clinton's. The Republicans went after Clinton on the Lewinsky, and thus Bill and Hillary were able to escape the White House without having to answer for their real crimes.

Remember? The 900 secret FBI files of opponents in the White House. (Chuck Colson went to jail for ONE FILE) The firings of the White House Travel officers. The Rose Law firm billing records disappearing for two years before being found in Hillary's office. The selling of nuclear secrets to China for campaign cash, campaigning in Buddhist temples, the payoffs from coal producers abroad to put our clean coal off limits. Bill and Hillary should both be in jail, but, the Republicans fell for the Lewinsky bit, and so the Clinton's escaped justice.

Most likely, Trump is using the birther issue as a way to fluster to press. And why would the media get flustered over the birth certificate issue? Because the lapdogs know that Obama is an unqualified disaster that they supported. Their credibility is on the line. That is why the sycophantic media props up Obama. Truth does not matter.

Now, to my neighbors question about my support for Trump.

I like the points Trump makes about our government letting China and OPEC walk all over us. I like his business experience, and remember, if Trump creates ONE job, that is one job more than Obama will ever create.

More importantly, Trump exposes the media's incestuous relationship with Obama. Perhaps the media can be shamed into fulfilling their Constitutional duties, and eventually be restored to sanity.

So, while Donald Trump may not be my ideal choice to defeat the anti-American Obama, I think Trump definitely could help our economy, and get back the millions of jobs Obama and the Democrats have destroyed.

While Trump may not be my ideal candidate, he is head and shoulders above Obama, who is the most unqualified person in any meeting he attends.

While Trump may not be my ideal candidate, I know he loves this country, and unlike Obama, Trump would not gallop the world to put her down or apologize for its citizens.

Just about any Republican candidate out there is better than Obama, and sooner or later, the whole truth about Obama, and his un-American activities and lies will surface. You see, truth always surfaces, and the Obama media can not do a damn thing to stop the truth from eventually getting out.

In the meantime, it will be fun to watch Trump step all over the media, and to continue to expose Obama for what he is.

And to you members of the press, better watch yourself in trying to mess with The Donald. Trump is too much for you. You are out of your league. Trump deals in reality, while you...lapdogs in the media...live in your Obama/Socialist fantasy.

I must admit, it would be nice to hear Trump say to Obama in a debate: "Barry, you have killed millions of jobs, you have wasted trillions of dollars. You play golf while cities burn, you kill our energy while empowering our enemies. Obama...YOU'RE FIRED!!!!"

More from this blogger · Sam Eldridge
Comments
View 18 comments
Note: The nature of the Internet makes it impractical for our staff to review every comment. Please note that those who post comments on this website may do so using a screen name, which may or may not reflect a website user's actual name. Readers should be careful not to assign comments to real people who may have names similar to screen names. Refrain from obscenity in your comments, and to keep discussions civil, don't say anything in a way your grandmother would be ashamed to read.
Respond to this blog