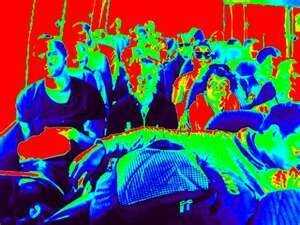 Every so often, I get a crazy idea. The notion hits me that it would be nice to try something different, to push the envelope a bit, to seek a bit of an adventure. I am a little too long in the tooth to try and climb tall mountains, or to take long swims across chilly lakes.

I wanted to go and visit my father in in the Valley of the Sun, rather than fly, I decided to try something really scary, something bold and adventurous, so I decided to take the bus, that's right...the bus, from North Platte to Mesa Arizona. A mere twenty five hour journey.

Adventure I wanted, adventure I got. Interesting as well.

2:30 PM-North Platte. Many of the passengers on the West bound bus coming through North Platte were from Detroit and Chicago heading for Las Vegas and Los Angeles. Some were in search of jobs, and some were just in search. They were a chatty bunch, and it did not take much to get them to open up.

They seemed really curious about how I could actually live in Nebraska. They found it hard to understand that I liked living in a small town, in the middle of farm country. One young black guy from Gary Indiana, said, "is there ANYTHING to do at night?" They asked me question after question, about schools, about housing, and of course, they asked about jobs.

I did my best to tell them that Nebraska was a great place to live and raise children. When I told them that I had moved from Denver to farm country about a dozen years ago a pleasant lady from Fort Wayne Indiana went, "No way!"

One young woman announced that she was heading to Vegas to look for work as a "Black Jack Dealer or a Stripper." A kind grandmotherly-type black woman from Detroit, immediately took a special interest in that gal, and talked to her for quite a while. When we arrived in Denver several hours later I think grandma had convinced the young woman that she should try and set her sights a bit higher than being a stripper.

6:20 PM -Denver. I had to change buses, and it was quite a change indeed. The bus had "AMERICANOS" the side, and the destination board on the front of the bus said: CHIHUAHUA.

The bus was packed, every seat taken, and most of the passengers were Spanish speaking, including the driver who really struggled with his English. The seats on the bus were close together, and for a tall person like me, it made the ride to Albuquerque a tough one. Sleep was hard to come by, not only because of the number of folks on the bus, but two Mexican gals, decided to talk in very loud Spanish, almost the entire way to Albuquerque.

My Spanish is rather limited, but from what I could gather, the ladies were excited about an upcoming wedding. I was glad that I had brought a book with me, thank God it was a good book, and this was my salvation on this part of the odyssey.

From North Platte to Denver, the bus made frequent stops. Not so on this leg of the Journey. The only stop was Las Vegas, New Mexico. Interesting Bus Stop too. Even at 2:40AM, a cook was present to make several Mexican food dishes. The man and woman working the bus stop did not speak English, but blasting through the store was an oldies station. So I listened to Roy Orbison while the nice man fixed me one hell of a breakfast burrito.

4:40 AM - Albuquerque, half the passengers got off, including the talkative ones, but they were replaced by more Spanish speaking folks, who were even more talkative.

Everybody felt like talking, with four or five loud conversations, all in Spanish, going on all over the bus. Crazy. I decided that I would try to talk as well, what the heck, and even with the language barrier, I did have fun in visiting, (or attempting too) with a nice young Mexican couple from Phoenix.

6:30 AM-Las Cruces I needed to change buses again, but I'd have to wait until 8 AM. Fortunately, this bus stop was at one of the best Truck Stops in New Mexico, the TA. (Travel America). After a long night with no sleep, I took advantage of this wonderful truck stop to take a shower. Fantastic. Wow, I needed that. Also, TA's are famous for having some of the best coffee around, and man 'o man, I need that too.

8:00 AM - The west bound bus arrived, and by that time sixteen people were waiting to get on. I found out something interesting about bus travel. Just because you buy a ticket, and are waiting for the bus, you have no guarantee that you can actually get on the bus - if the bus is FULL.

Four people got off, so only four of us could get on. This did not sit well with all the folks waiting. The Driver, (again with only moderate English speaking abilities), chose four of us to get on. Why I was chosen? I don't know. The pleasant couple from Phoenix also were chosen, but I think the driver told them they would not be able to sit together.

I did not have to speak Spanish to know what the dozen folks who were left behind were saying as the bus, now Greyhound, departed Las Cruces! The young man (the couple I had tried to talk to earlier) managed a smile as he scrambled for a seat and said: "suerte". Yup my friend, we were lucky indeed.

I was fortunate to find a seat next to a 27 year old English teacher from Austin Texas on her way to Los Angeles to see family. She spoke wonderful English, and Spanish as well. She noticed the Novel I was reading and that led us to quite a conversation on our favorite authors.

Imagine my surprise when I discovered that she was a Ayn Rand fan! She also helped me "listen in" to what many of the other passengers on the bus were saying. I felt a little out of place as I was one of only three Anglo's on the bus out of fifty-five passengers, the maximum allowable capacity of this bus.

When we reached the Border Patrol Check point on I-10, I thought things were going to get a bit interesting. The driver pulled the Bus to the right of the checkpoint, and soon, two Border Patrol Agents got on the bus. They began asking each passenger if they were United States Citizens. Most answered "Si" or "Yes", but the Border Patrol agents only checked the papers of those who answered "No".

I found that interesting. You can decide about the futility of such checkpoints, and the effectiveness of their questions.

Onward. 10:30AM - Lordsburg, New Mexico. Three buses, two East bound and my West bound bus all arrived at the ONE McDonalds in Lordsburg at the same time. The line for food went out the door, so I passed on that particular thrill of standing on line for a Big Mac. Thank God my wife had sent along some snacks with me. Nice thinking babe!

Fifteen minutes is all the time allowed, and many of the passengers scrambled to make it back to the bus in time.

This driver was fluent in "Spanglish", and I was told the next stop was Tucson.

12:55 PM - Tucson. Incredibly, I needed to change buses again. As I departed the bus, the young Mexican couple came up to me, and with the help of the bi-lingual English teacher, they wished me well, and we shook hands, and said goodbye.

I was getting a bit tired, and the one hour wait for the bus heading towards Mesa was kind of tough. The bus station only had vending machines, and they were expensive ones. $2.50 for a coke. $1.75 for a small bag of peanuts. There was however a large television in the station with CNN showing pictures of the devastation in Japan. Everyone in the station was watching the incredible pictures of the Earthquake and Tsunami.

2:00 PM - a tour bus showed up, and I was pleasantly surprised to find that this bus was my ride to Mesa. This was a nice bus, equipped with Wi-fi, and large comfortable seats, and as tired as I was, I slept the two hours it took to get to Mesa.

"Gracias", I answered a bit groggy, but glad my journey was over.

So, will I take the bus back to North Platte?

More from this blogger · Sam Eldridge
Comments
View 9 comments
Note: The nature of the Internet makes it impractical for our staff to review every comment. Please note that those who post comments on this website may do so using a screen name, which may or may not reflect a website user's actual name. Readers should be careful not to assign comments to real people who may have names similar to screen names. Refrain from obscenity in your comments, and to keep discussions civil, don't say anything in a way your grandmother would be ashamed to read.
Respond to this blog