The Face of Valor - Salvatore Giunta 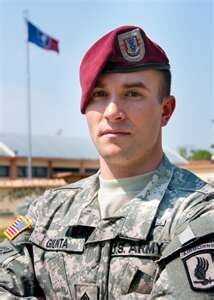 Sometimes you run across a story that warms the heart. Such is the case with American hero Salvatore Giunta. Sgt. Giunta would make Audie Murphy proud. I am amazed at the incredible courage our soldiers show in representing the people of the United States.

Salvatore Giunta is the first American Soldier to receive the Congressional Medal of Honor, and live to talk about it, since Vietnam. Sgt. Giunta would tell you that he is not exceptional, that every man that fought with him that incredible day in Afghanistan is a hero, not him. Humility is often a trait of true heroes.

Specialist Salvatore A. Giunta distinguished himself conspicuously by gallantry and intrepidity at the risk of his life above and beyond the call of duty in action with an armed enemy in the Korengal Valley, Afghanistan, on October 25, 2007.

As he crested the top of the hill, he observed two insurgents carrying away an American soldier. He immediately engaged the enemy, killing one and wounding the other. Upon reaching the wounded soldier, he began to provide medical aid, as his squad caught up and provided security.

Specialist Giunta's unwavering courage, selflessness, and decisive leadership while under extreme enemy fire were integral to the platoon's ability to defeat an enemy ambush and recover a fellow American soldier from the enemy. Specialist Salvatore A. Giunta's extraordinary heroism and selflessness above and beyond the call of duty are in keeping with the highest traditions of military service and reflect great credit upon himself, Company B, 2d Battalion (Airborne), 503d Infantry Regiment, and the United States Army.

Typical of a hero, Giunta really wants to play down what happened that tragic night in Afghanistan that October night in 2007 that left two of his pals dead.

"It's kind of an awkward situation. Every single person I was with would have done what I did, possibly even better, but they were doing other things. So for a medal to be awarded to me for actions that are above and beyond, sometimes it's hard for me to stomach hearing that."

Salvatore will be returning home soon, in June 2011, to his native Iowa and plans to attend college in Colorado.

In an interview in the Des Moines Register (on-line) Sal's parents Rose and Steve Giunta of Hiawatha, Iowa, said their son believes this medal represents the selfless actions of every soldier in the squad - as well as every soldier in combat.

"That kind of sacrifice that the soldiers do for one another brings me to tears," his father said. "There's something bigger here. It's bigger that Sal."

Thanks Sal for your inspiring actions and remarkable humility. I am thankful for you and your fellow soldiers, and may God grant you the peace to handle the loss of your friends that fateful night far away from home.