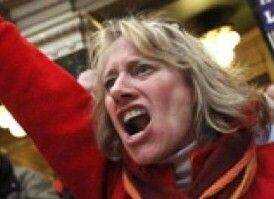 As we continue to see, liberals are the very essence of hypocrisy. The propoganda media hammered away at the Tea Party Patriots for being violent, when there was no violence. Democrat leaders cried racism, when there was no racism.

When the State-controlled media needed proof of their claims, they just made things up and came up with whatever stories would fit their template, or they taunted the patriots. Remember Nancy Pelosi and the Congressional Black Caucus taunting peaceful protestors the day they rammed through Obamacare?

When the taunting did not work, they lied. All one need do is take an accurate look at the Union/Socialists protests in recent days to see the very faces of hate.

Wisconsin Republican Senator Glenn Grothman was literally chased around, heckled and eventually cornered as he tried to enter the Wisconsin State Capitol. Finally, one Democrat with some sense came to his rescue. When Tea Party Patriots merely showed up at open forums to ask direct questions of their treacherous elected officials, the Obama-run media slammed them as violent and hateful. Libs gone wild!

A Wisconsin Democrat State Representative, Gordon Hintz, screamed "You're f**king dead!" at fellow Wisconsin Representative, Republican Michelle Litjens. You have to be intentionally stupid to think that if a Republican man screamed this type of hatred and anger at a female Democrat, we would never hear the end of it.

Here is a nice video showing Wisconsin school children admitting that they were let out of school, then bussed down to protest with the Socialist teachers and they had no clue why! Libs Gone Wild!

Don't have to be a Harvard graduate to know what would have happened if a single Conservative teacher (if there is such a thing) were to have jerked public school kids out of school to attend a Tea Party Patriot rally.

"Shut up and be a good Socialist!"

You'll love this story. In nutty Seattle, College degrees are now considered racism. (As usual, with leftists, you'd laugh if it wasn't so pathetic) Not only that, but Seattle Police are now under orders not to impose traffic and DRUG laws against minorities, and to assist in helping illegals escape Federal Law Enforcement.

To wacky Libs, equal enforcement of the law is racism. To wacky Libs, holding illegal aliens infesting our country for Federal authorities, is racism. Ah, the torment that is the Liberal mind. Libs Gone Wild!

Now we move to the tolerant left as they protest against sanity, to a marvelous display of unionized public employee thuggery.

The following video shows scenes from protest in Atlanta, where a union coward blindsides someone who disagrees with his Socialist agenda. Protesters from Sacramento and other California towns show their hate and stupidity. Onward to Chicago and Boston, where one protester engages in anti-semitism, and finally an older woman is knocked to the ground by tolerant union members. Onward to Ohio, Rhode Island and finally Wisconsin where a Fox News Anchor is punched (in the back of course) by a tolerant liberal.

When the millions of Tea Party Patriots stood up last year to fight the Obama regime's attack upon this Republic and our Constitution, there was not one single episode of violence from the patriots. Yet again, your lame-stream media has little or nothing to say about the union thuggery going on routinely.

This video is a bit graphic, so you've been warned. I don't want to hear from you chronically offended Liberals about the words or actions of your union buddies. Spare me.

The video ends with a Democrat Politician in Massachusetts telling the Liberal mob that they need to get "bloody in the streets." Libs Gone Wild!

Unions are a breeding ground of greed and Socialism and an excuse for laziness. Can you dig it? I knew that you could.

More from this blogger · Sam Eldridge
Comments
View 36 comments
Note: The nature of the Internet makes it impractical for our staff to review every comment. Please note that those who post comments on this website may do so using a screen name, which may or may not reflect a website user's actual name. Readers should be careful not to assign comments to real people who may have names similar to screen names. Refrain from obscenity in your comments, and to keep discussions civil, don't say anything in a way your grandmother would be ashamed to read.
Respond to this blog