The Good, The Bad, and the Brainless 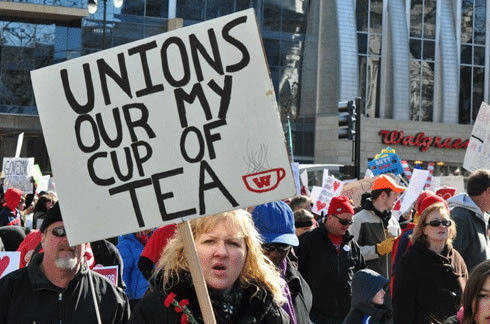 One can only hope that the nimrod holding the sign above is not an English teacher. This sign should be an embarrasment for any teacher, or any public employee.

Let us examine some facts from one Wisconsin school district, the Milwaukee Public Schools. The average salary/compensation package for MPS teachers equals 100,005.00 per year. More than double the median income for FAMILIES in Milwaukee.

The Taxpayers are ponying up a staggering $13,818.00 per year, per student, to educate Milwaukee's children.

Can you imagine what would happen if surgeons performed only 41% of operations correctly? Even a lowly fry cook would be fired for preparing 41% of his/her dishes correctly. A truck driver that only delivered 41% percent of his/her loads would be fired, and no one would ever hire them to drive a truck again.

And yet, somehow, teachers are exempted from the world of reality. We are to only look upon their intentions, their nobility.

More data from Wisconsin's own MacIver Institute shows that Milwaukee Public Schools have 10,943 employees, but only 5,766 are teachers. The Taxpayers are paying for, get this, 505 Psychologists and Social workers. So then, the Taxpayers are stuck paying for 4,672 other staff and management people.

And more bad news for MPS, the district faces a 2.2 BILLION dollar unfunded liability just for health care benefits for its RETIRED employees.

Wisconsin voters have had enough. They voted in politicians who ran on a platform of correcting this kind of reckless spending, and poor results that went along with it. Some past administrations in Wisconsin had tried in vain to deal with these problems, but one obstacle always remained in the way of finding solutions. That obstacle, the Wisconsin Teachers Unions.

When the Tea Party Patriots protested the dangerous and foolish policies of the Obama Administration, Democrats berated them for hate speech, and called them racists.

Yet, look at some of the signs held up by these Socialists Unions in Wisconsin.

The shameless unions also hired the homeless to carry signs. Children were taken out of school and brought down to protest. Many of them did not even know why they were there. Legislators were spat upon and threatened.

Now keep in mind that while Milwaukee teachers are basking in annual compensation of 100K, Milwaukee ranks second in joblessness among the nations largest fifty cities.

So, as comrade Obama says we all need skin in the game, I am trying to see where the teachers unions have done anything to help the plight of the Milwaukee Public schools.

Do not think that other school districts in other American Cities are not experiencing the same thing. They are.

The fact is, the biggest bullies in most school districts today are the teachers unions.

No wonder that a majority of Americans are behind the courageous Wisconsin Governor in his efforts to restore sanity to public schools. It is time to end the death grip that teachers unions have on America's public schools.

Maybe then, we can move to end all public employee unions.

Even the Patron Saint of American Liberalism, FDR, was adamant the public employee unions where not in the best interest of the United States.

"All government employees should realize that the process of collective bargaining, as usually understood, cannot be transplanted into the public service." - Franklin D. Roosevelt.

More from this blogger · Sam Eldridge
Comments
View 51 comments
Note: The nature of the Internet makes it impractical for our staff to review every comment. Please note that those who post comments on this website may do so using a screen name, which may or may not reflect a website user's actual name. Readers should be careful not to assign comments to real people who may have names similar to screen names. Refrain from obscenity in your comments, and to keep discussions civil, don't say anything in a way your grandmother would be ashamed to read.
Respond to this blog