Jay Cutler - Reaping What You Sow 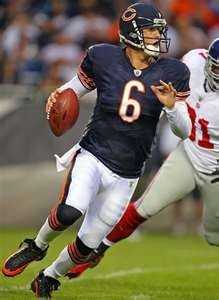 When the second half of the NFC Championship Game began, I was listening to the game on Westwood One while negotiating a small but testy blizzard in Montana. One of the announcers, former All-PRO Randy Cross, was really struggling for the right words to describe what he saw regarding Jay Cutler, the Bears QB, standing on the sidelines.

A couple of times Cross started to question Cutlers' heart, but he held himself in check, saying that the QB could be more severely injured than it appeared.

Players around the NFL were not watching what they said. Many former and current PRO's turned on Jay Cutler the way I have never seen PRO players do in the past. Some came right out and called him a "sissy".

Today, after an MRI, it was determined that Cutler did in fact sustain an injury, and reports from team mates confirmed that Jay Cutler tried to go on with his leg/knee in bad shape.

Still, many fans, players and pundits are still hammering away at Cutler, perhaps the most talented QB the Bears have had in modern times.

What is going on here? I think the answer is rather easy. Cutler did this to himself.

When the Broncos fired Mike Shanahan and brought in Josh McDaniels, Cutler acted like a petulant little child when he heard the new coach was not automatically installing Cutler as the Broncos QB.

Oh Cutler is a tough guy, I don't think he missed a single game as the Broncos starting QB in three years. When Bronco fans, and the new coach, wondered about Cutlers poor mechanics, or his tendency to make red-zone turnovers, or his habit of missing wide-open receivers, Cutler responded by saying that he had a stronger arm than John Elway.

That was just dumb. Who cares?

Elway was more than a strong arm, and whether or not Cutler could hurl the football farther than the Hall-of-Famer Elway was not the point.

Cutler didn't see it that way, and many fans and players alike saw his reaction as pouting or arrogant.

So Cutler had his feelings hurt and insisted upon a trade, and got one - to a good team.

Cutler stomped his foot, and refused to even give the new Broncos coach a chance, or fight for his job, as almost every player in the NFL must do every single year.

Now, of course, guys like Payton Manning, Tom Brady or Big Ben really don't have to "fight" for their jobs, but they earned that honor. Cutler had not.

The fact remains that the Bears O-line has been suspect all year. Cutler had been battered and beaten up all year, and has showed real toughness.

Still, it was Cutler, prior to his injury, that missed a wide open Devin Hester, for what would have been a touchdown. You see, Kyle Orton would have made that pass, so would most of the NFL QB's. In fact, when the Bears were reduced to using their 3rd string QB, the new guy made the very same pass later in the game for a touchdown.

So why are many fans, media types and players still hatin' on Cutler?

It is the arrogance and condescension.

Michael Wilbon from ESPNChicago.com said it this way:

"But we don't hear those Peyton Manning-like stories about Cutler, how he comes early to practice and stays late and works systematically and demonically at getting better. What we hear, even from teammates in both Denver and Chicago, is that Cutler is an arrogant, pouting player who rates himself quite highly. It's a characterization that is believed totally throughout the league,through almost any pro football circle you wander into. And because it is believed wholly that Cutler is a guy with a big arm, an overrated sense of himself and little if any heart, precious few people in Cutler's own fraternity had any sympathy for him during the game. It will be interesting, from what we know of Cutler, to see if he even notices."

Wilbon continues: "A former quarterback who wears a Super Bowl ring, who has studied Cutler's entire career in the NFL, told me before he left the field Sunday, "The sad thing is that if he embraced working on the monotonous details of quarterbacking he could be great.""

One thing I always have to remind myself of is this: these guys are young, and inexperienced in life. All their lives they have been told how wonderful and special they are, and without a good mentor, or a fatherly coach, many struggle with the realities of life.

Cutler missed an opportunity in Denver to man-up. In my opinion, Jay should have stayed in Denver, and worked on growing up.

Several days ago, I heard an interview with former heavyweight boxer Michael Moorer. He regretted that he had failed, when he was younger and in the fight game, to work and improve his character, and missed an opportunity that few men ever got, to be a top fighter, and perhaps champion.

I sincerely hope that Jay Cutler got the message from fellow players and fans. Jay Cutler has the ability and talent to be a champion. All he lacks is maturity, and that is the hardest thing to coach.

Time will tell if Cutler has the heart, not to take a hit on the field, but the heart and courage to change his attitude.

I really hope he makes it.