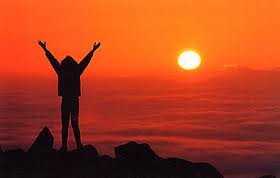 I think it would be impossible to go through an entire day as an over-the-road truck driver and not give thanks to God for this great country.

Thank you Lord for Utah. Mountains and canyons, and rivers, and Monument Valley, and lakes and wonderful people.

Thank you Lord for a fantastic couple in tiny Pomeroy Washington that own a small cafe. A few weeks ago, I pulled into Pomeroy, population about 500 I think, and let me tell ya, I was dog tired. I was desperate to find a place to park and sleep. Up ahead I saw a spot next to a cafe that had just closed. I stopped and knocked on the cafe door to ask if I could park next to their cafe and sleep a bit.

These folks were something else. The lady insisted on fixing me some home made ham and bean soup. Best damn soup I think I have ever had. They were so kind to me, and my dogs, and they encouraged me to sleep as long as I needed to. The next morning they made sure I had plenty of fresh coffee and carrot cake before I drove onward, and I had to practically force them to take some money. As I left the cafe, I noticed a sign above the door. It said: "Do a kind thing every day". I am sure this couple does just that. Thank you Lord.

Oh, and thanks God for the Black Hills, for smooth roads, for wonderful sunsets and the Columbia River Gorge. Wow!

During the years my wife traveled with me, (she stays home now and does the grandma thing) she would say "Wow!" several times a day. This is such a beautiful country. Travel through Western Montana, or Northern Arizona, and you'll say "Wow!"

Donner Pass, the Grand Tetons and Corpus Christi are all sensational, and I think I have seen almost every one of Minnesota's 10,000 lakes. (Well, maybe I haven't seen all ten thousand, but I've seen a bunch!)

Thanks Lord for Lake of The Woods Minnesota. A major "Wow!" And I think the Mojave desert is awesome. So is Mobile Alabama. If you haven't ever been there, as you travel East to West on Interstate 10, you'll cross Mobile Bay, then travel underneath downtown Mobile and come out on the other side. Very nice.

Ever been through Dallas or Chicago at three in the morning? These giants are incredible when they sleep.

Hardly time to mention the Grand Coulee Damn, or Devils Tower, or Nashville, or the pleasant folks in Del Rio Texas. And I could write for hours about all the wonders of Idaho. Craters of the Moon National Park, or the Clearwater River. This river was correctly named. You travel along side the Clearwater, and you'll see that the water IS so clear, you can see the bottom of the river, and the fish in the river, as you drive through phenomenal canyons and forests.

Then there was Ben from New Jersey. An older black truck driver who stopped to help me one day when I really needed help. I had stalled my truck in a bad way, blocking traffic in Southern California. Ben stopped, risking his own rig, and, with a certain joy in his hard face, pulled me to safety and helped me restart my truck. I tried to give him money...Ben would only take a handshake. Thanks God for Ben.

And a big "Thanks" Lord for never having to go to New York City! Or Boston for that matter. I leave those two cities for the truly brave at heart.

Oh sure, there is some unpleasantness on the road, the Bureaucrats in the DOT, bad drivers, blizzards and breakdowns, but there is something special about driving a fine rig through magnificent country.

My friend Orville has taken thousands of photos of this country as he has traveled about, and I am hopeful one day, he'll be able to get all these remarkable pictures to where folks can see them. He calls these amazing photos "Views from my cubicle".

Just this past October, I had the opportunity to drive through the Colorado Rockies several times, and with the snow-capped peaks, and colorful trees, I had to call my wife several times to tell her what I was witnessing. Thanks God.

Have you traveled through Virginia in the Spring? Or Pennsylvania when all the trees turn a brilliant red? It will stir you, and I haven't even mentioned the oceans or the American wildernesses.

We do have wilderness country in the USA. Northern Nevada has 400 miles of "outback". New Mexico has wilderness galore, and then there is Texas. 260,000 square miles of Texas, and much of it wilderness.

I love all the different cultures in America. Each part of the country has their own special uniqueness, and I feel honored to share in that unique culture when I visit the South, or Seattle, or even Nebraska.

God help me, I love traveling this country. Why would anyone spend big bucks to travel abroad when there is so much to see in the USA?

More from this blogger · Sam Eldridge
Comments
View 95 comments
Note: The nature of the Internet makes it impractical for our staff to review every comment. Please note that those who post comments on this website may do so using a screen name, which may or may not reflect a website user's actual name. Readers should be careful not to assign comments to real people who may have names similar to screen names. Refrain from obscenity in your comments, and to keep discussions civil, don't say anything in a way your grandmother would be ashamed to read.
Respond to this blog