In Search of Senator Johanns 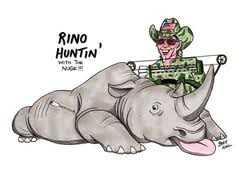 I made a simple phone call today to Senator Mike Johanns' office in Washington DC. I had just two questions for the enthusiastic lady answering the phone.

"Is Senator Johanns a liberal, a moderate or a conservative, or something else?"

"Oh, he is a conservative," she quickly answered.

"Hey, that's great to know," I said. Then I asked, "Does the Senator favor the repeal of ObamaCare?"

This question should be very easy for a "conservative" Senator from the Heartland.

Just to make sure that this was not some weird anomaly, I called Senator Johanns' Omaha office. By golly, the answer was almost identical, except there were a few more "ahs" and "ums", followed by this, "The Senator favors repealing the 1099 tax provision of the Health Care Bill."

Really? Thanks for nothing Senator.

Listen to me for just a minute Senator. I know I am not as brilliant as you Washington politicians, so forgive me if I use a crude example to explain my lowly self.

If you sprinkle perfume on dog crap, you don't end up with a bouquet Senator. It is still just dog crap.

The election yesterday was not a referendum on Republicans Senator. It was a stern rebuke of the Socialist agenda of Obama and his anti-American policies. Are you spending so much time near the dog crap that you do not notice that it stinks?

This is the problem that many have with Republicans Senator. You claim to be a conservative, yet when the bullet hits the bone, you flinch. And we don't need any more stinkin' flinchers.

This is why Republicans were booted from power just a few short months ago. Have you forgotten?

Senator, this may come as a shock to you, but "We the People" are sick and tired of the double talk, and fed up with the compromises. Oh, I know you voted against ObamaCare, but that was a safe vote, was it not? You knew that it was going to pass the Senate regardless of what you voted, so it was an easy "NO" vote.

But now, when the will of "We the People" has been clearly laid out, what do we get from you? "Ums" and "ahs".

Senator, the folks have given the Republicans a second chance here to do what is right. To defend the Constitution, and to fight the forces that are trying to drive our Republic into the ground.

Remember Senator, George Bush said he was a conservative, and the Republicans were given a chance at power. What happened? You know what happened. They took that mandate and ruined it by acting like Democrats, spending money, creating entitlements and running up deficit spending.

Let me give you another example of your RINO behavior. You have sponsored a bill to "Protect Unborn Children From Unnecessary Pain."

Excuse me while I puke.

So, it is okay to kill the babies, as long as we don't hurt them while they are being killed? Are you crazy?

And you wonder why the folks have a hard time trusting Republicans. It is because of this kind of nonsense Senator. Why not sponsor or support a personhood amendment?

Senator Nelson betrayed the people of Nebraska, and the unborn, with his hideous vote for ObamaCare, but none of us were really surprised. That is what Democrats politicians do. They will say whatever they need to say to get elected, then they go to Washington and vote like Socialists.

Conservatives, Senator, are suppose to have principles.

If you do not support the repeal of the atrocious ObamaCare disaster, then you are no conservative, and I would appreciate it if you'd stop pretending that you are a conservative.

At least be honest with us. I know honesty is hard for a politician, but I am asking you to be a Statesman. We have enough freakin' politicians, and they are driving the country to ruin.