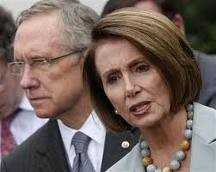 Quoting Van Helsing of Moonbattery "Socialism is the system by which we all submit to living as government slaves for a guaranteed subsistence at a subhuman level. Essentially, it is enslavement of the productive by the nonproductive. Socialist governments killed over 100 million of their own subjects in the course of the 20th century. Yet it continues to be fashionable among Democrats, confirming that reasoning with these people is not an option."

Courtesy of hotair.com, we get a glimpse of the crimes that this insidious bunch of Congresscritters, controlled by leftists, have done to inflict injury upon this Republic.

"The 111th Congress began by dropping a trillion dollars in debt on the American taxpayer. The money disappeared in a wild spending spree, buying $2 million jobs in Los Angeles, and evaporating into nonexistent zip codes. Billions of dollars remain clogged in the filthy pipes of government, producing nothing but more debt through accumulated interest payments. Much of the "stimulus" money was used to pump lard into government payrolls, creating useless jobs that vanished as soon as the taxpayer subsidies ran dry. The President recently admitted that the stated reason for appropriating this vast sum of money, the creation of "shovel-ready jobs," was an outright lie.

Government payrolls, are the only thing that expanded during the past session of Congress. Public sector jobs multiplied like a virus, and the number of six-figure government employees skyrocketed. Meanwhile, real unemployment in the private sector - including seasonal adjustments, long term discouraged workers, and the underemployed - hit 22% nationwide. The lights burned bright and merry in the plush offices of K Street lobbying firms, while the rest of the economy slid into darkness.

This Congress demonstrated its economic wisdom with the Cash for Clunkers program, which wasted billions of your dollars in a futile attempt to shovel new car sales from one quarter to another, giving them a "success story" to tout for a while...until they realized nobody was gullible enough to consider it successful. Meanwhile, it drained sales from healthy industries, destroyed the used-car market, and provided incentives for low income buyers to rack up more debt they cannot afford to repay.

The 111th Congress stank with the corruption of Christopher Dodd, Jack Murtha, Maxine Waters, Charlie Rangel, and Harry Reid. The ruling Party made it clear that it would go to any lengths to protect its worst members from investigation and punishment. The agenda of this Congress was conducted behind closed doors, or slipped like poison into the legislative bloodstream, to escape the notice of the American people. Fat bailouts for loyal union allies were hidden inside bills that were suppose to fund the military. Nobody knew what this Congress was really voting on...including members of Congress, who didn't bother to read the bills anyway.

The House of Representatives was presided over by a Speaker of astonishing arrogance, who recklessly abused her power for personal convenience. Caught in a trap of her own making, after trying to score political points against terrorist interrogation techniques she had been fully briefed on, Nancy Pelosi tried to weasel her way out by claiming the CIA lied to her. The disgraceful "leadership" of Pelosi and Reid will be studied by generations to come, in the kind of class future kids only have to take when they're caught skipping more interesting classes to fool around on their hoverboards.

This was a Congress at war with American business, which is a war against American liberty, since business is the instrument through which we invest the hours of our lives. The 111th Congress spent its term menacing the private sector with disastrous, economy-killing ideas like cap-and-trade, Card Check, and value-added taxes...then wondered why nobody was creating any jobs. There's no point in taking risks and doing the hard work to be a winner, when the losers get taxpayer bailouts, provided they have employees from the right labor unions.

Of course, this is the Congress that shoved ObamaCare down our throats. Drafted in secret, hidden behind fraudulent cost estimates, and understood by none of the people who voted for it, ObamaCare is the most shocking dereliction of Congressional duty in recent history. Its architects flirted openly with violating the Constitution to inflict it upon us through reconciliation, before they managed to buy enough votes with our money. It has already destroyed thousands of jobs, and inflicted painful new costs on hapless workers who thought their health insurance was suppose to get cheaper.

The passage of ObamaCare shattered the myth of the "moderate Democrat" for a generation. Every one of them is an accomplice to this radical offense against the American people. Private comments from Congressional representatives made it clear they knew exactly what they were doing to us. They saddled us with a system designed to fail, and pave the way for something even worse: single-payer socialized medicine.

Faced with electoral destruction at the hands of an enraged populace, the Democrats of the 111th Congress spent their last days calling the voters stupid and insane. They scurried out of town without even passing a budget, leaving a recessionary economy tied to the ticking bomb of the expiring Bush tax cuts.

Remember the 111th Congress this Tuesday, and render your verdict in the voting booth."

The 111th Congress, setting new lows. God help us as we recover from this disaster.

More from this blogger · Sam Eldridge
Comments
View 16 comments
Note: The nature of the Internet makes it impractical for our staff to review every comment. Please note that those who post comments on this website may do so using a screen name, which may or may not reflect a website user's actual name. Readers should be careful not to assign comments to real people who may have names similar to screen names. Refrain from obscenity in your comments, and to keep discussions civil, don't say anything in a way your grandmother would be ashamed to read.
Respond to this blog