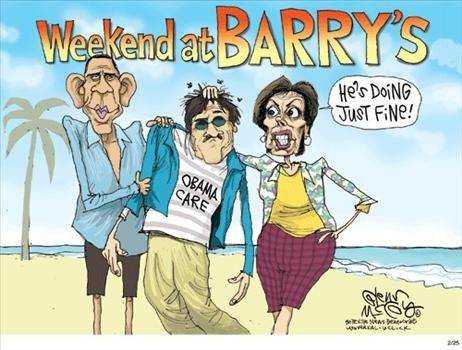 *You've had three abortions but you are so proud that you recycle aluminum cans.

*You believe Glenn Beck is a extremist because Keith Olbermann told you so.

*You believe in the separation of Church and State; Mosque and State, not so much.

*You believe that hurricanes are caused by people, and that crime is caused by the environment.

*You believe that college students must protest the President, but never challenge anything the professor says.

*You believe that African American, Gay and Women's Studies prepare young people for good careers, but a Biology major is an outdated relic of white misogynist domination.

*You believe that meat is bad for you. So is milk. But marijuana gets you ready for your finals.

*You believe that global cooling for the past ten years proves there is global warming.

*You think that treating all people equally, regardless of race, is racist.

*You burn tons of carbon to attend a global warming conference that sanctions the cleanest nation on Earth.

*You think everyone would agree with you if they were open minded, and yet you refuse to listen to any other possibility.

*You believe that a mosque should be built at Ground Zero, but Jews shouldn't build apartments in their own capitol city of Jerusalem.

*You believe that prostitution empowers women, but having a man open the door for a woman is degrading.

*Your dog is named Jeff, but your children are named Spot, Mogadishu and Apple.

*Your dog is smaller than your cat.

*You believe that Western women suffer at the hands of men, but Islamic women are greatly respected.

*If your political arguments contain the phrase, "It's Bush's fault."

*You believe that being Pro-Life violates right of privacy, but you want to tell people they can't eat french fries.

*You believe that immersing a crucifix in urine is fine art, but depicting the Mohammad is insensitive.

*You spend your day telling people that a border fence can't work, then drive home to your gated community.

*The only time you use the word "choice" is when it comes to abortion. School Choice, or the choice to shop at Wal-Mart should be prevented.

*You think that men who are aroused by women's breasts are freaks, but homosexuality is completely normal.

*You think gay students should be allowed to publicly kiss in class, but Christians shouldn't be allowed to quietly pray during a break.

*You argue that teenagers can't control their sexual urges no matter what we do, but you think that child molesters and rapists can control themselves after counseling.

*You believe that four year old babies should be frisked at the airport because focusing on nervous young Arabs would be discriminatory.

*You think that Hezbollah is a legitimate political party, but Republicans are just a bunch a racist haters who should never be exposed to college students.

*You claim that you are not unpatriotic, but you can't remember that last time you sided with the United States ... on anything ... against any country.

*Truth matters much less than feelings.

*You are more proud of Obama's race than of John McCain's refusal to leave his buddies behind in a Vietnamese prison.

*You believe that all recounts must continue until the Democrat takes the lead, and not a second longer.

*You believe that Babs Streisand knows more about politics than Newt Gingrich.

*You believe that conservatives need to be rounded up and put into in camps to prevent them from acting like Nazis.

*You think that people are having too many kids, yet you need those kids to pay your government debts.

*You think banks earning money on interest is wrong, but paying interest to China on the national debt is just peachy.

*If you ran low on your Valium the weekend Glenn Beck had the Restoring Honor Rally.

*You claim Sarah Palin was too inexperienced to be VP but you have no problem thinking that the community agitator Obama had plenty of experience to be President.

*You really want to travel to India to study spiritualism there, but you wouldn't be caught dead in a church here in America.

*You claim that Math tests are racist, but there is nothing racist about blacks being admitted over more qualified white applicants.

*You work to ensure that People should be allowed to euthanize themselves, but not to eat in McDonald's.

*You think that Europe became great because of Islamic influences.

*You cry about racial profiling yet you think that all serial killers are white and all Mexicans are hard working family men.

*You think that anytime a Western woman travels to the Middle East, she should respect their Islamic traditions and cover up. As Muslims have illegally infiltrated Europe, you think they have the right to expect Westerners to adjust to them, or the Muslims should riot.

*You believe that Counseling is the proper punishment for all crimes except sexual harassment and racism.

*If you really believe that Barack Obama has the best interests of the United States in his heart.

*You believe the government can run health care even though they have bankrupted Medicare and Social Security.

More from this blogger · Sam Eldridge
Comments
View 17 comments
Note: The nature of the Internet makes it impractical for our staff to review every comment. Please note that those who post comments on this website may do so using a screen name, which may or may not reflect a website user's actual name. Readers should be careful not to assign comments to real people who may have names similar to screen names. Refrain from obscenity in your comments, and to keep discussions civil, don't say anything in a way your grandmother would be ashamed to read.
Respond to this blog