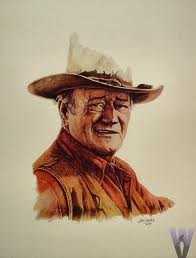 I think the left finally has committed the ultimate misdeed. This latest outrage may be the big one. Universal forces are in play here. Armageddon may be next as the planets deviate from their proper alignments.

Liberals have shown no regard for the Constitution, or God, or Free Enterprise, but I remain optimistic, I believe our nation can rebound. But this latest stunt...from Hollywood, may be the final push that brings about the end of all things normal.

This latest disrespect from the entertainment infidels is so hideous, I hesitate to say it. I feel like speaking the atrocity will only add to this nightmare. Some of you may need to sit down.

The remake of True Grit will soon be upon us, to be released in December.

In the mind of the Hollywooders, Jeff Bridges can replace John Wayne as Rooster Cogburn. Adding even more salt to the wound we find that hyper-leftist Matt Damon will be in the movie.

What is next from Hollywood? Can we expect to see Rosie O'Donnell starring in The Song of Bernadette? Will they remake Ben-Hur with Bill Maher as Judah?

A new Dirty Harry with Chris Rock as Harry Callahan? If they think that John Wayne can be re-made, well then anything is possible.

Perhaps George Clooney as Patton, Lawrence of Arabia with Tom Hanks as TE Lawrence can only be next, followed by a new Casablanca with Jon Stewart.

Almost thirty years after his death, John Wayne still kicks the new guys to the curb in popularity.

Jeff Bridges is a fine actor, and no one will ever be "the Dude," in The Big Lebowski, but Jeff Bridges. I like some of his other movies as well, but John Wayne he is not.

There was only one John Wayne.

John Wayne is Rooster Cogburn, McClintock, Cole Thornton, John Alder, Taw Jackson, John Henry Thomas, Will Anderson, and many others. Some things do not need improvement.

Leave John Wayne alone will ya? Powerful forces are at work here baby. If you libs trample on too many sacred institutions, you may be inviting fire and brimstone.

Be careful Hollywood, you may be messin' around with somethin' you shouldn't be messin' with.

Now Hollywood, you've done some nasty things in the past, and we the public have forgiven quite a bit. Shall I remind you of such stinkers as Santa Claus Conquers the Martians? Or Catwoman? Those were some nasty flicks.

We even overlooked it when you made the masterpieces Howard the Duck and the Adventures of Pluto Nash. C'mon already.

You're messin' with John Wayne. Get a clue.