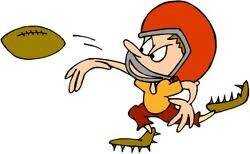 I am not sure what will happen next year in the NFL. There is a feeling that the players and the NFL have much work to do to reach a new agreement...but in the meantime, there is sure some good football being played right now.

How about Michael Vick? Here is a guy that has made the long road back. You got to hand it to the guy, he paid his dues, he served his time, he paid some heavy fines in money and time. And yet he persevered.

The Houston Texans are for real this year. Last week they easily handled the Colts, and today, on the road, against a very good team, the Redskins, the Texans come back from 17 down, and tie the game on a long forth down play.

And I wonder how Dallas fans feel about the Cowboys being 0-2? Cowboy fans were freaked out after the first week loss to Washington, and now this.

And what about Minnesota, and Farve? They don't look so hot right now. It is a long season I know.

And then there is Kansas City. Chiefs 2-0! Turns out that the Chiefs are a gutsy team, who have now found a way to win games they once lost. Interesting to see how the season will pan out. The AFC West may be much more competitive than folks thought. Denver played well today, as did Oakland, and San Diego.

It looks like the Huskers are on the verge of becoming a super team for several years. This kid Martinez, is something special. I think Nebraska is back, and in a big way.