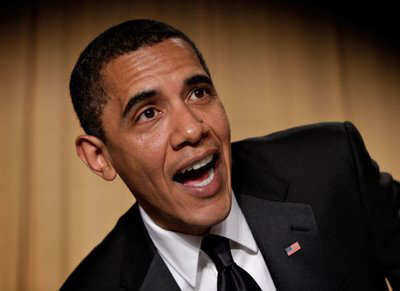 photo courtesy of the Drudge Report

One thing for certain, our Vacationer in Chief sure does know how to live like a rock star. Oh baby! Whether it is expensive vacations for family and friends, or hours upon hours playing golf or basketball, or lavish parties at the White House, the Obama's party like it is their divine right to do so.

Frankly, Obama should party even more. The lavish trips and fancy parties costs "We the People" much less money than his dystopian policies and misguided thinking.

Up coming this week for the first couple is the black tie bash for the Congressional Hispanic Caucus. Christine Wilkie, with The Hill online, "reports" that the Hispanic Caucus party is "one of the more entertaining political galas of the Washington fall season."

When is the Caucasian Caucus party?

This kind of thing just warms your cockles doesn't it?

I am sure the millions of folks who are jobless thanks to Obama and his ilk will take comfort in this "gala".

Hopefully the Obama royal family will have some time to rest up! Two days later it is time for the black tie formal bash for the Congressional Black Caucus and their Phoenix Awards dinner. A massive party to bestow honors on big time leftists gurus like Sheila Y. Oliver, Harry Belafonte, Simeon Booker and Judith Jamison.

Harry Belafonte? Are you kidding me?

When is the Caucasian Caucus bash again?

The busy Obama's will take time in between parties and golf, and basketball, and the scores of fancy chefs coming to the White House to prepare tofu delights, to entertain freshly indoctrinated college athletic youths. Liberals are never too busy to proselytize our young folks into the wonderful world of government god.

The Prez will party like a King while record numbers of Americans are out of work and on food stamps.

It is hard to understand how liberals think, until you realize that liberals are basically intellectual maggots.

I mean this as no insult, just factual. Liberals spend their days mentally feasting upon the rotting flesh of ideas that were long ago discarded as dung.

You feast on dung, and what do you get? You get massive runaway spending and debt, true unemployment approaching 16%, record numbers of folks on food stamps, more intrusion upon individual freedoms, higher taxation, more homeless, more illegals (undocumented Democrats) more misery and more death.

But forget about all that. It's PARTY TIME! As you struggle to pay higher costs for just about everything, take comfort knowing that our "king" will party for you. I'm sure he'll be thinking about you the whole time, don't you?