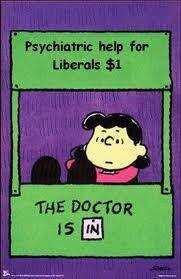 One of the things I enjoy most about Glenn Beck and Sarah Palin is how they inspire liberals to make fools of themselves; thus the doofus effect.

Beck managed to invigorate several hundred thousand folks to come to Washington DC (which is no picnic) to honor America. For weeks Beck has been asking folks to pray. I know, very radical stuff for liberals.

Liberals think prayer is having you fill out paperwork begging the government for a handout.

Beck asked for people to spend a few minutes each day, on their knees, before God. This drives the left crazy. Liberals prefer that you listen to the apostles of Socialism in the state run Obama media.

Beck also asked folks to tell the truth, as much as possible, to help to restore honor, first to individual Americans, then to America.

Liberals have to throw a fit at this. Truth exposes liberalism for the lie that it is.

Beck and Palin speak to the good in America, and Americans, and this drives the left nutty. Liberals believe that America is THE problem in the world.

The left has engaged in an all out smear campaign on Sarah Palin since the moment she was announced as McCain's running mate. Libs get weird when they see sucessful women who actually like men and respect life.

Women all over the country are not happy with the unfounded attacks on Palin, and that has led to a flood of conservative women candidates now on the move, working to restore our Constitutional Republic.

And that drives the left crazy.

So on a day that Glenn Beck and Sarah Palin, prayed for the Blessings of an Almighty God, as they honored heroes, as the niece of Dr. Martin Luther King spoke of love of Christ, Obama went out of his way to explain, to anyone who'd listen, that he was ignoring it all.

Expect the left to become more and more unhinged as the lies of liberalism continue to be exposed.

I remember these same leftist tactics during the Jimmy Carter mess. The media lied about Reagan, slandered him, called him extreme, or senile, or a racist, or whatever, and the end, "We The People" rejected the hysteria and hate of the left, and put Reagan into office ... twice.

More from this blogger · Sam Eldridge
Comments
View 27 comments
Note: The nature of the Internet makes it impractical for our staff to review every comment. Please note that those who post comments on this website may do so using a screen name, which may or may not reflect a website user's actual name. Readers should be careful not to assign comments to real people who may have names similar to screen names. Refrain from obscenity in your comments, and to keep discussions civil, don't say anything in a way your grandmother would be ashamed to read.
Respond to this blog