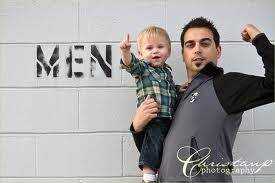 Not too long ago I saw the episode on "Deadliest Catch" with Captain Phil Harris, clinging to life. The man had barely survived a major stroke, one got the sense that Captain Phil knew his days were numbered. With his son at his bedside, holding his hand, Phil wasn't talking very clearly, but clear enough. He said, "I wish I had been a better father."

The man speaks volumes with but few words.

And yet, how did Captain Phil Judge himself? He had success, he had money. He wished he had been a better father.

We all fail at times, that's a fact. The men we admire make mistakes too, don't they? We all have at one time or another, disappointed someone we love.

What is it then, what is that one thing that will help us be better men, to disappoint less and accomplish more?

There is a word that comes to mind, and that word is conviction. The convictions, or fortitude that we display and live by.

The Bible says "a double minded man is unstable in all his ways." Are we always able to live up to our convictions? Not only "no" but "hell no."

That does not mean that we should not try to live up to convictions, just because we fail at times. That is a trick of the left, the ideal that person cannot aspire high ideas because we are human; and at times, we will fail to live up to to those same convictions.

And I am talking about convictions. The idea that you and I have a core belief, a code, and come hell or high water, we will stick to those convictions.

I refer to one Manly Man, the Apostle Paul, who told the Corinthians to "Be on the alert, stand firm in the Faith, act like men, be strong," and then he adds, "Let all that you do be done in love."

That is a clear picture of a man. On the alert, firm, strong, and yet acting out of love.

The most effective tool in fatherhood is leading by example. Ouch! Did I say that?

And fathers, we need to start setting the right examples.

More Americans are on food stamps today than ever before, over forty million. Do you and I have friends or family relying on the government for food when we could stand in the gap and help? What example are we setting? Let government do it?

You may say, "Well Sam, what will it help if I buy $1000 of food for my nephew and his family instead of the government? I pay taxes for those food stamps."

The difference dear friends is that God will take that seed, and make it grow in ways you cannot even imagine. God will bless your giving.

That is but one example of how we can be better fathers, better examples...in a world that looks to government to solve all its problems. Why should our family, or even our friends, need to look to government to for help when they have us?

I didn't say it was easy, but we men must accept the fact that the government is acting as "the man" in many homes because we have failed to be "the man".

A friend of ours is in need, but we buy a new flat screen tv.

I talk about fatherhood and manliness together because they are bound in the same heart, and that heart must be heart of convictions.

We are in need of manly men. Harvard Professor Harvey Mansfield writes in his book, "Manliness" a definition of manliness as "confidence in the face of risk, ... a quality of spiritedness that induces humans, and especially manly men, to risk their lives in order to save their lives."

And, "A manly man asserts himself so that he and the justice he demands are not overlooked. He rouses himself and seeks attention for what he deems important, sometimes something big...manliness brings change or restores order at moments when routine is not enough, when the plan fails, when the whole idea of rational control by modern science develops a leak."

Let me do an "Obama" here and use his tired phrase, "Let me be clear." I am speaking to myself as much as I am to any of you. God gives us clear illustrations and instructions as to how to be Godly men, Godly husbands and Godly fathers.

We all need to step it up. I'm just sayin.

More from this blogger · Sam Eldridge
Comments
View 5 comments
Note: The nature of the Internet makes it impractical for our staff to review every comment. Please note that those who post comments on this website may do so using a screen name, which may or may not reflect a website user's actual name. Readers should be careful not to assign comments to real people who may have names similar to screen names. Refrain from obscenity in your comments, and to keep discussions civil, don't say anything in a way your grandmother would be ashamed to read.
Respond to this blog