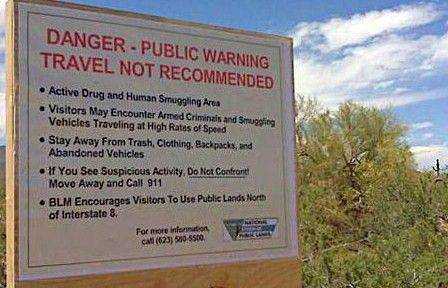 The sign shown above and others like it are now appearing in parts of Arizona as far as eighty miles north into the State from the Mexican border.

Are Arizona Law Enforcement officials now telling us that there are vast areas of our country that are not secure from foreign invaders?

As I am on my way to Nogales, Arizona I will try and stay out of trouble. I'm really not that worried about the trip, but I did leave my dogs at home. I'd hate to be walking my dogs and suddenly find myself surrounded by hundreds of decent hard working Mexicans citizens in high speed armed caravans, carrying pot and other drugs, on their way to do all those jobs Americans will not do.

That would be scary. And what happened if I had to defend myself, or my doggies? You know the rules. The poor downtrodden Mexican nationals, forsaken by all, and persecuted by white folks, are in search of a scrap of bread, and the evil Anglos should stay away, and give ground.

Just look when our President let the Mexican President bad mouth the most meager of efforts one State made to secure our borders. The Democrats stood to applaud the race card once again, and now we have territory inside the United States that is not safe from foreign invaders, human traffickers, drugs dealers and other criminals.

Conservatives have a golden opportunity to have some serious and frank talk about Mexico and our relationship to Mexico and all of Latin and South America. We should be strengthening our relationship, in a proper way, with Mexico.

But no amount of talk will fix anything until the border is first secured. There has been evidence that Mexican soldiers have ventured into the US on numerous occasions, and a recent report of Mexican military pointing their weapons at US Border patrol.

Please politicians, do not give me the "we need comprehensive immigration reform" BS! Secure the border first, then let's talk about what to do with the gazillions of illegals that are already here.